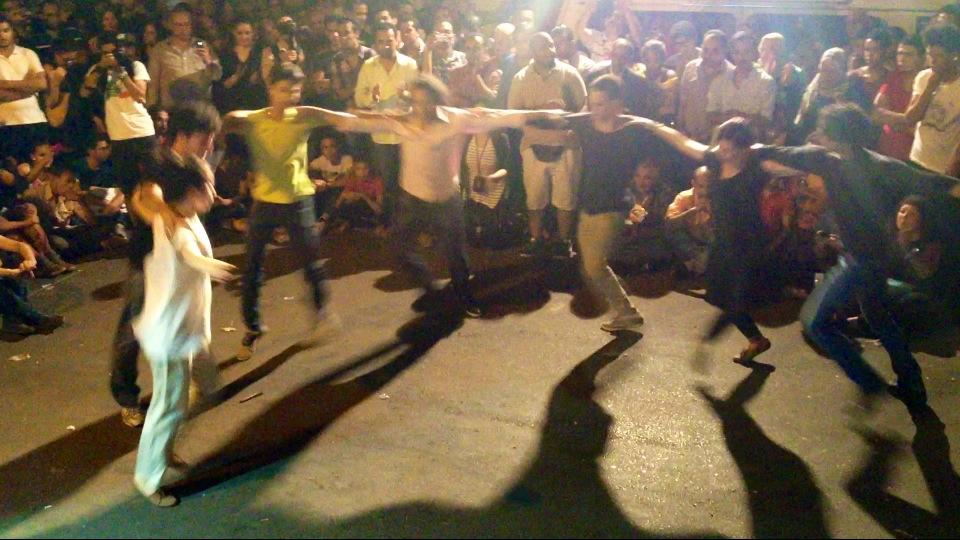 You have not danced until you have danced side-by-side with your students in the middle of an Egyptian artists’ protest street performance on your birthday.

I wrote about the sit-in at the Ministry of Culture building in my last blog post. It has now been 18 days of the occupation–mattresses on the floor–and performances continue every night outside the gates. I do not stay there overnight, but I come out to support in nearly every day. There have been both Muslim and Coptic Christian prayers, the stage is adorned with posters of legendary musicians and poets and actors, a collaborative mural temporarily titled “The Arts Are Stronger than the System,” and large banners reading “Art is Resistance” hang above the crowd.

All Egyptians. All beautiful. It is an incredible scene to see all different types of artist activists coming together. Artists of different disciplines who hadn’t crossed paths much before are now collaborating daily and sharing meals. It has been an honor to be there and to dance with them.

The police have been present every day, enjoying the shows and acting as a shield during the one initial attack of the MB weeks ago. The Ultras (hardcore soccer fans) have also agreed to be there every night to help with security: they’ve have done an excellent job protecting the crowd. These young guys might not be there for the arts and may disrupt performances by bursting into their own songs and chants, but there have been no major clashes or injuries.

Even with all this, the atmosphere is increasingly tense. Everyone is on edge as 30/6 approaches. Small fights have erupted onstage and in the crowd. At different times, controversial figures have come to the sit-in and been expelled with some uproar. June 30 will be the one year anniversary of Morsi’s presidency and the call for what might be the next revolution. 30/6 is spray painted throughout the city. A 30 June Coordination Committee has been assembled with representatives of over 25 liberal political parties and opposition movement groups. Some are calling for impeachment and military rule until a proper constitution and processes are put in place. Some are calling for early elections by collecting more petitions than the actual number of people who voted for Morsi: this is called the Tamarod (Rebellion) movement and they have collected more than 13 million petitions on the way towards their goal of 15m. El Baradei has called on Morsi to resign; if he did, the Shura Council would take over and organize elections within 90 days.

Morsi supporters, on the other hand, say he is doing a good job cleaning up corruption, blasphemy, Western-influence and haraam by replacing governors, ministers and other officials with Muslim Brothers (Ikhwan) and Islamists. The problem is these newly appointed men have little to no experience in the sectors they control; and at least one, the new Governor of Luxor, is a proven terrorist. Plus, many of their policies take steps backwards on women’s rights, education, Syria, tourism, freedom of the press, and the arts.

There are many differing opinions among the artists on the direction to take, whether to combine with different opposition movements or to stay on message, whether to reach out to Western media or to stop all foreigner involvement. There is also fear of how violent next week might get. A video has been spread of Muslim Brotherhood members training for attacks, using shirts to tangle-up victims and then striking. There is also talk that same Ikhwan men are playing into people’s fears, threatening any anti-Morsi protestors with large-scale attacks.

Some artist activists have left the sit-in to start preparing field hospitals for the 30th. Some artists have already declared they will be willing to go to the front lines.

Personally, I will do what I can to support my Egyptian artist friends these coming weeks, while also keeping safe and out of the way. This I promise.

As this 30/6 despair, ferocity and volatility come rolling over Egypt, I am looking for generally positive actions and ideas from artists and liberals. These could be individual, collective, regional or national. Even international. Please post them in the comments section below. Let’s share a little inspiration. We all could use it.

Here’s a few from me: