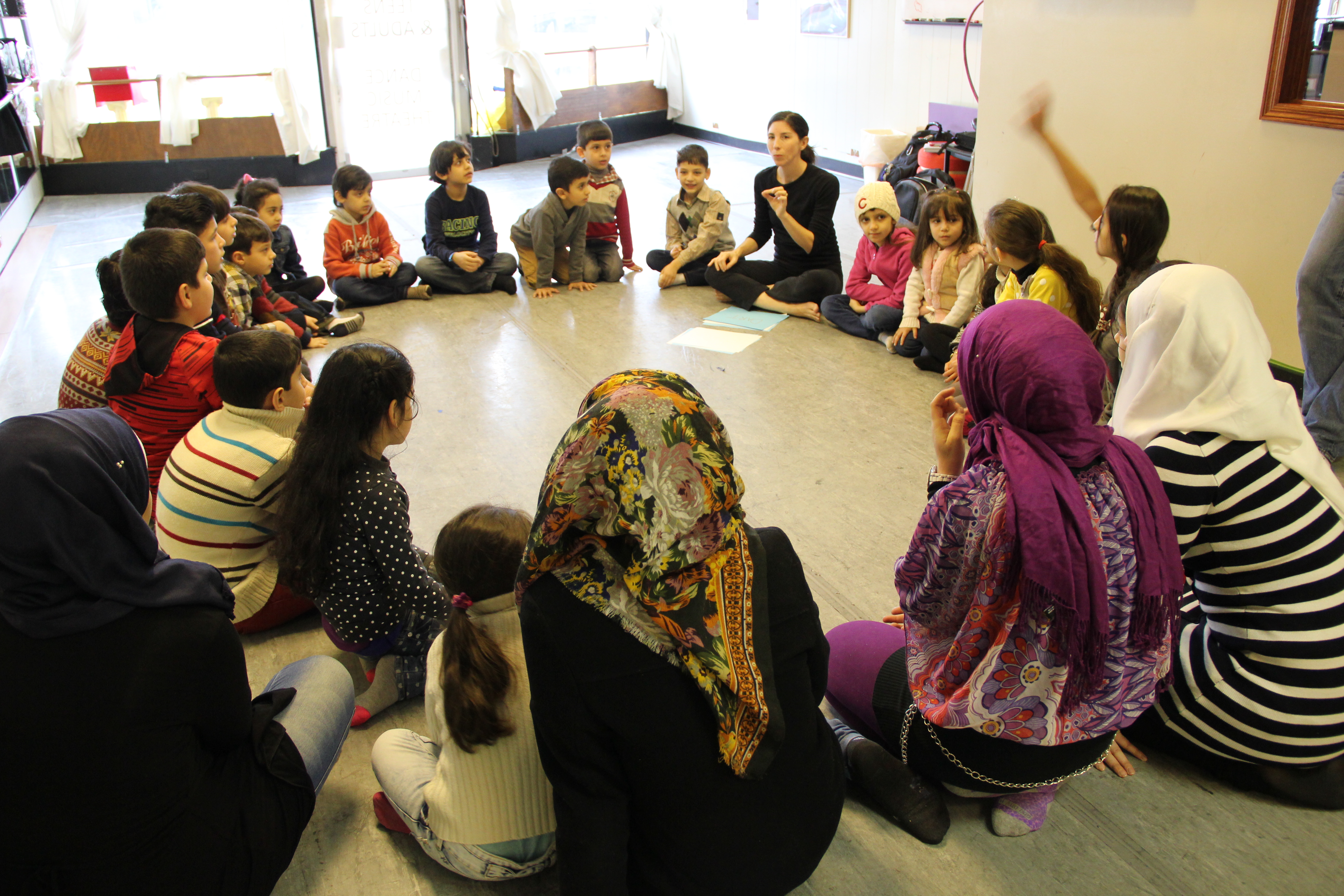 What We Can Do to Help Syria

I was in college during the genocides in Rwanda and Bosnia. As a theatre major/dance minor at a liberal arts school who was admittedly immersed in herself, in Millikin-world,  in a strong education and new ways of thinking, I barely remember the news. Class assignments and rehearsals and flirting and friendships all took priority of my consciousness. The closest I got to thinking deeply about others and about being a global citizen was when I took Ethics with Dr. Money. I loved the class discussions about abortion, corporal punishment and more…  we did not, however, talk about wars and the U.S.’s indirect or direct contributions to  conflicts such as Iraq, nor our responsibility to help. No class or professor or classmate even mentioned Bosnia, Rwanda, Palestine, Northern Ireland, Sudan…; if they did, I wasn’t listening.

I have no defense. Being an artist (or a student, or both) is no excuse for being completely arts-absorbed, deaf to the world.

Decades later when I read “A Problem from Hell”: America and the Age of Genocide by Samantha Power and traveled to Bosnia, and also Occupied Palestinian Territories, and Northern Ireland, I was devasted by how much was happening in the 1990s that I had been unaware of at the time. I didn’t even know when I was party to gentrification or privilege. I didn’t even see what was happening on the other side of the river in Saginaw, MI.

Well, now one big world crises is Syria. And it is serious. It is devasting. And I hope we as artists are listening. 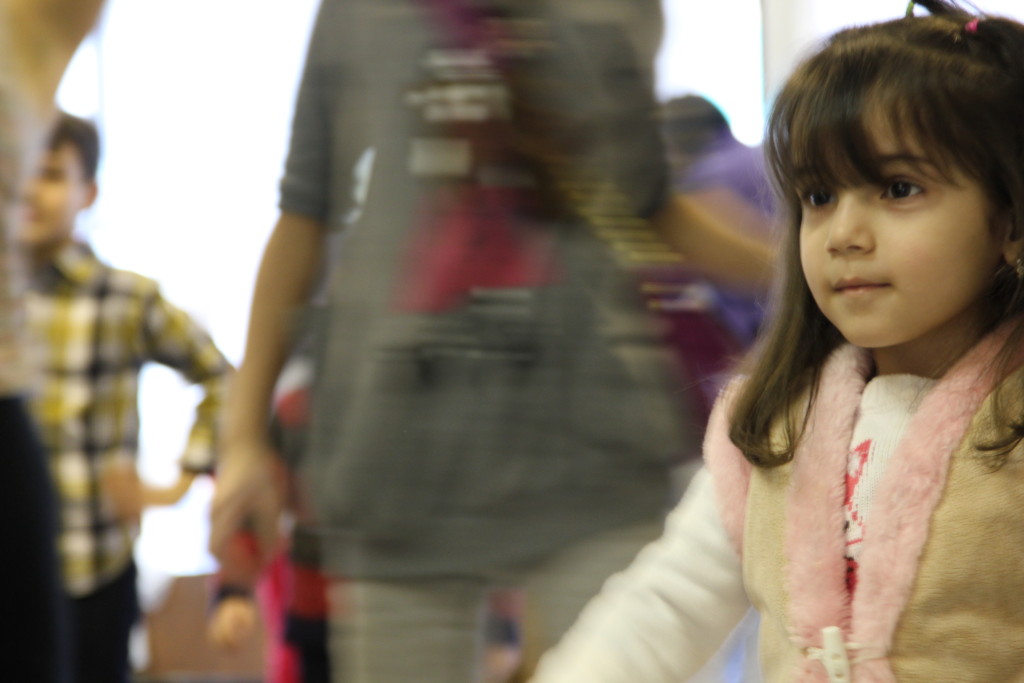 According to the UN and Amnesty International…

The U.S. could set a better example by welcoming more refugees and also strongarming the leaders of the high-income countries mentioned to do something.

We, as the artist community, might not be rich and may be (like me) unemployed or underemployed, but we are wealthy in potential contributions of another kind. 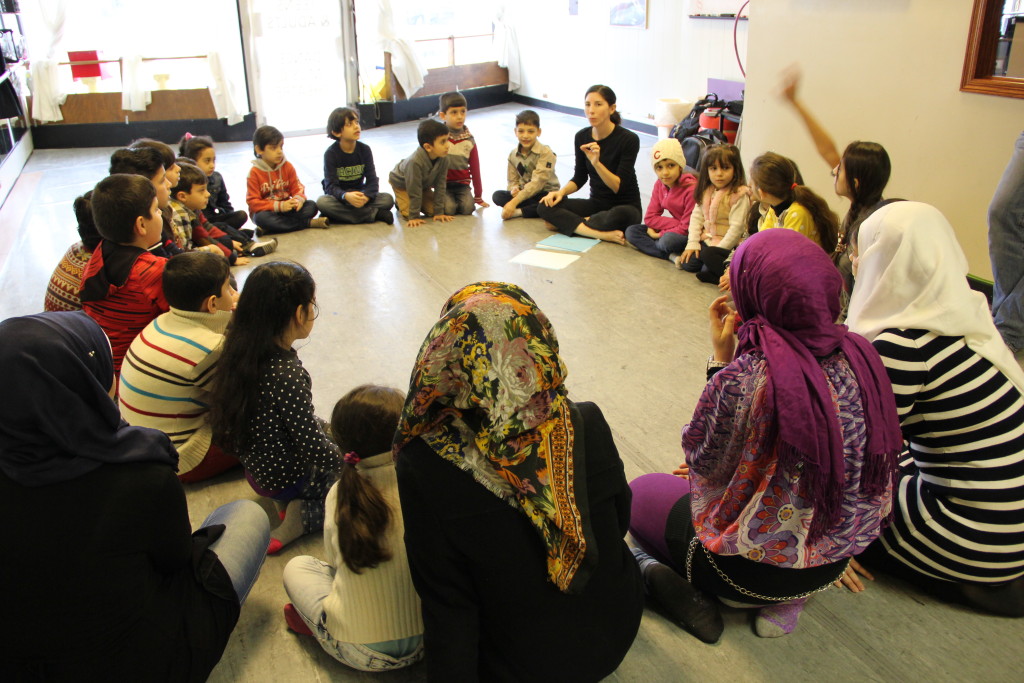 In Chicago, there are 25 refugee families; my friend and I found out during a holiday event for the cause. Their services are managed by Catholic Charities of the Archdiocese of Chicago and the Syrian Community Network (a small, local nonprofit organization run by an amazing woman and her mother). You can read example stories of the families on their website. We asked what they needed: English tutoring, quarters for laundry, gift cards for groceries, and feeling welcome among their new neighbors, new homes.

After some further investigation, I found out the families live within walking distance of the small dance studio where I used to teach for nearly a decade and continue to sub. I love this school. They said yes right away to my proposal of hosting the Syrian refugees in the studio.

I have volunteered to offer a series of English language learning dance workshops (free of charge) in this space (also donated) where the children and their parents will mingle with other dance parents (mostly Jewish and Christian), as well as to collaborate on a community performance opportunity in June. 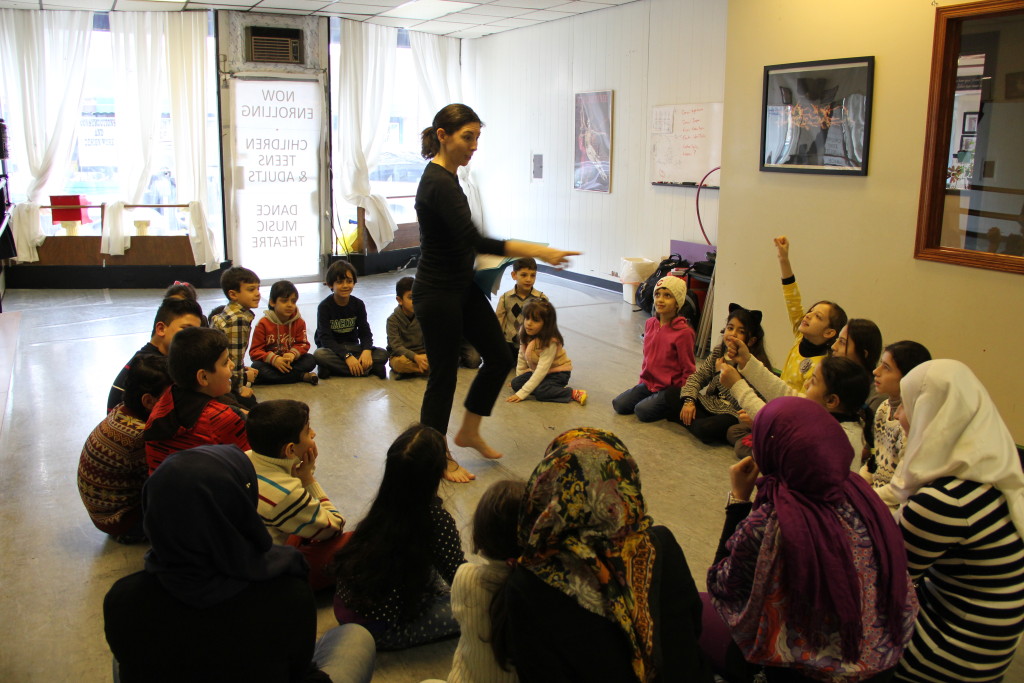 We started last week and it was amazing.

One of the students I supported in Egypt is now in Chicago getting his masters as a Fulbrighter; he is volunteering to help with translation and facilitation during the workshops.  Other guest teachers and facilitators have also signed on to volunteer.

We just need a little help. 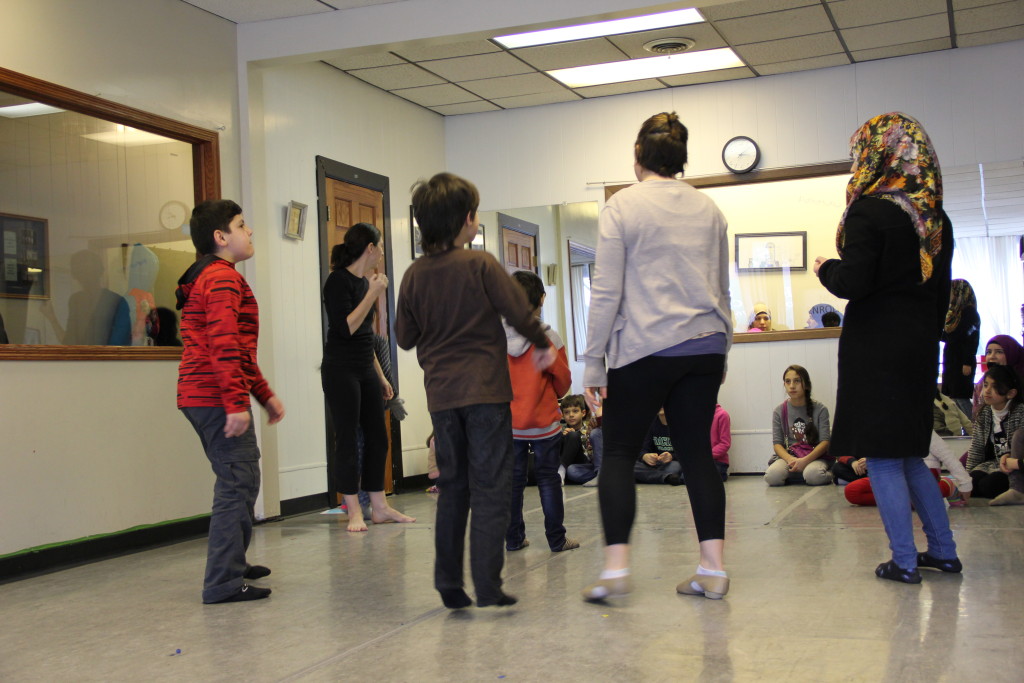 One of my intentions is to make the experience as authentic as possible. I want the workshops and performance to be as close to what the paying students get. The Syrian refugees are real dancers and I want to treat them as such, Although we incorporate certain social-emotional skills and language goals for these particular students, we provide them disciplined dance classes in ballet and jazz, fused with the assets of their traditional Syrian dances and culture. Sweaters and jeans won’t do.

Plus, I cannot fathom the visual of all the other dance students in polished outfits while the “poor refugees” are on stage in t-shirts and socks. 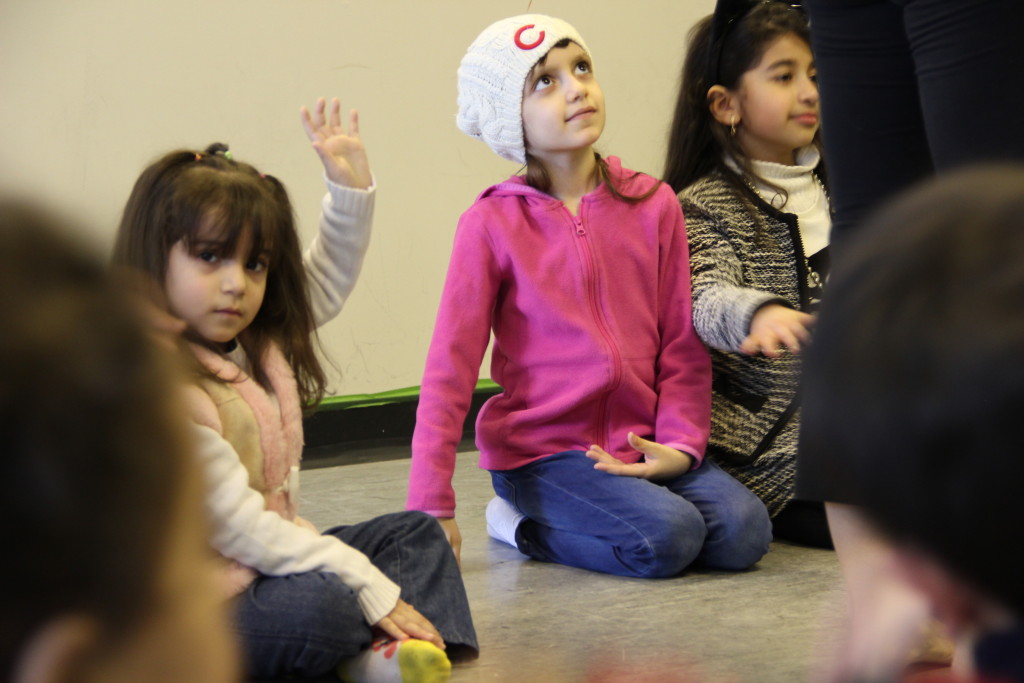 If you can, I ask you to also look for the refugee communities in your area and see what they need. Welcome them into your dance, music, theatre, and visual arts worlds. Look into the possibility of bringing ourselves as artists to refugee camps. At the very least, continue to open our ears to crises and to be a voice in the face of fear and Trumped policy. 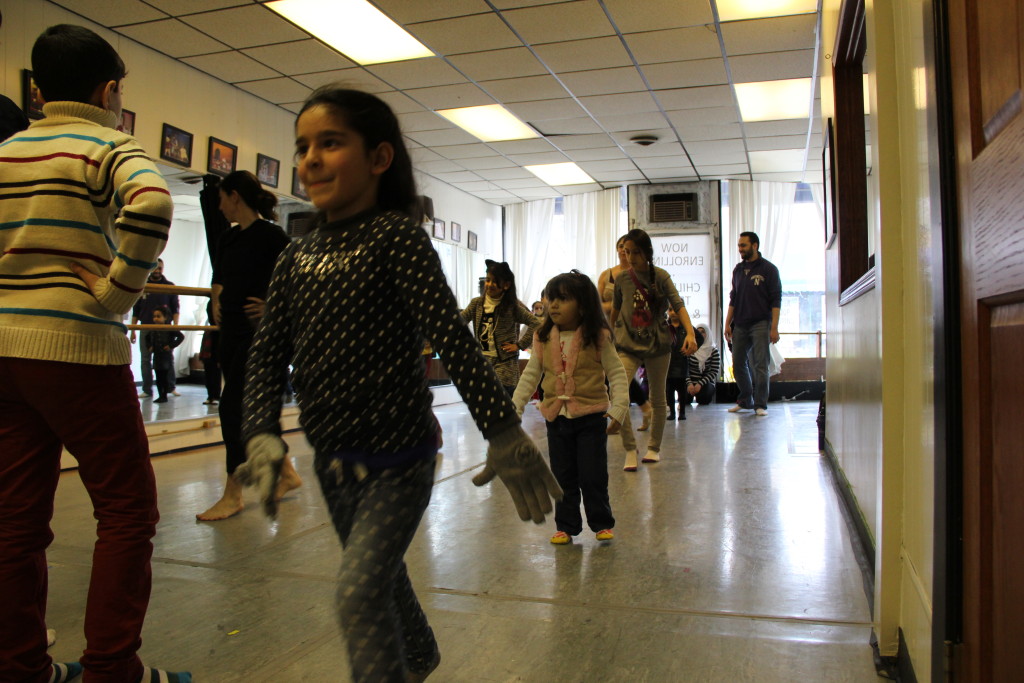 So You’re An Artist Who Wants to Apply to Fulbright