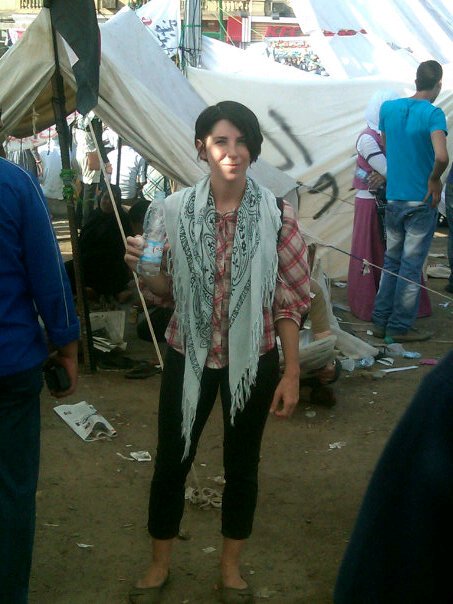 I was not revolutionary in the way my Egyptian friends were revolutionary. I was not there when the tanks came towards the crowds, when snipers aimed at frontline artists, or when the camel-riding thugs swung machetes. But I was there in the Square, often during 2011-2014, as the world changed around us and planning was no longer possible.

These were years that my calendar was blank and I (a notoriously heavy planner) had to learn to be okay with that.

Quick anecdote: In September 2012, I stepped into my role of guest teacher at the Egyptian High Institute of Ballet, as a U.S. Fulbright Scholar. I came with a detailed curriculum and lesson plans for American jazz and modern dance. The administrators told me to prepare for a 30 minute performance in December, and I carefully thought through a plan to get the students ready for that show. Due to restrictions on me bringing in translators, conflicts in teaching styles, and general lack of focus, we were struggling to pull together even 5 minutes of shareable content, but we continued. I kept asking the administrators when in December the show would be, as I was planning to go back to the U.S. for Christmas and I also needed to know how many weeks of rehearsal we had remaining, in order to plan. No one could give me answer.

On December 10, I was told there would be no show. Instead, the Minister of Culture had ordered them to produce Pinocchio. I was told I had one week to prepare my students for a full one-hour, memorized evaluation that would be adjudicated by women I did not know and would have no communication with.

I looked around, and I was the only person in the entire school that was frustrated by these huge changes and the inability to plan forward thoughtfully. My Egyptian colleagues and students seemed to all be thriving in the uncertainty.

During preparation for the exam, I learned that I would not be able to speak or help my students at all during this evaluation that was now looming 7 days away. If a student failed the exam, they may be kicked out of the Institute; there was a lot of pressure inside the school while tensions mounted outside its walls.

Each day that week, I planned intensive practice sessions that made use of what the students already knew. My fellow teachers encouraged me to add additional morning sessions rather than trying to fit everything into the existing schedule. They had to remind me that the class schedule now had to fit our new goals. And in the end, the students did great on the exam.

By January, I was weaned off my dependencies on calendars.

Every morning for the next few years brought something unexpected.

You (the figurative you) called people up to see what they were up to. You decided to do something the day of that thing, then if that was canceled you just went to a different thing. You drove or walked around to see if the thing you saw online was really happening. You taught preschool ballet in the dark when the power went out. You gathered friends and colleagues to create dance programs for the Children’s Cancer Hospital. You documented.

You planned for the following weekend or maybe two-three weeks out. You might distribute a schedule for this month, but it was also clear to all stakeholders where changes would be posted or how updates would be communicated. You never used a single doodle; you just went with it if some people were available. If you heard truthful and impactful news, you shared it.

You held your ground but were flexible in your actions. Every day was a choose your own adventure, choose your own happiness. And you bent the rules maybe for the first time ever while you innovated need ways of working. You watched and alerted. You helped your neighbors. You made neighborhood blockades out of store shelves and organized impromptu community policing systems when needed.

If something needed to happen, you made it happen as immediately as possible. You put on a show where and when you could. You protected one another’s basic needs while making art (song, installation, pop up museum, street dances, murals) along the way. You created enough art that the world mostly remembers your revolution for its spirit rather than its sacrifice.

People sold popcorn and winter scarves in the Square. The McDonald’s stayed open.

You took each day at a time, or rather, each third of a day at a time. It’s similar to how you plan for Chicago weather. Ready for anything, even nothing, or nothing you’ve seen before. You learned to love that uncertainty and that presence. Living in the now, only this time you meant it.