Well, it is actually next week but it’s time to start getting revved up. 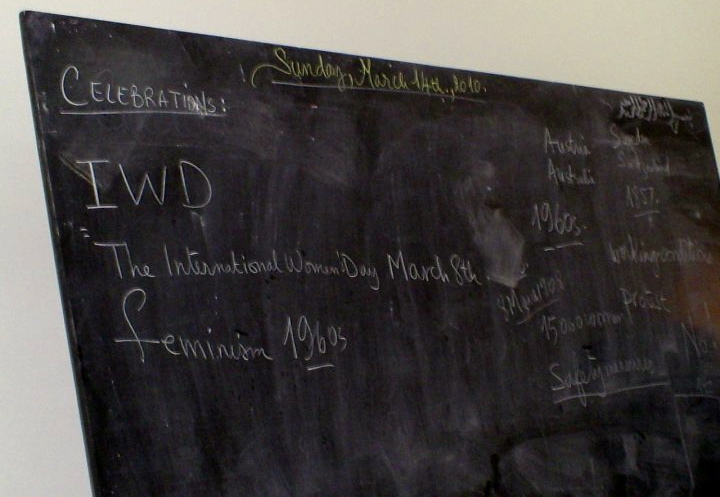 This is a chalkboard from an all-male Qur’anic school (Islamic theological seminary) in Morocco. History or English class; I didn’t understand which. I was with a group of Americans and Europeans visiting the school on March 8, IWD in 2010. And this was on the board.

We didn’t discuss the chalkboard. As visitors, we were just popping in to say hi, but I found myself compelled to take a quick picture. A class full of future Imams and Islamic scholars were studying International Women’s Day and feminism. Hmmm. I didn’t have enough information to determine if this was awesome or sad. I lean toward the side of awesome. (But this is the same school in Morocco where the headmaster told me no young women are admitted because in order to progress to a certain level, the young men have to memorize the entire Qur’an; and the female brain does not have the capacity to do so.)

The list of can nots, should nots, and never coulds is long in many cultures, especially for women and girls. I admit it: I’m a stubborn gal and these irk me.

While chatting with my good friends from Saudi Arabia last year in Chicago, I mentioned how much I was interested in visiting the Gulf country. To “paint the Riyadh town red” while avoiding arrest. Knowing cars were out of the question, I joked and asked them if women could drive Vespas there, or even electric bicycles. They said probably not, but confirmed that women could drive jet skis. Awesome. I would love to drive a jet ski in Saudi, wearing a sassy little burk-ini.

People ask me all the time, “What is life like for women in the Middle East nowadays?” Firstly, it is difficult to generalize. Every life is unique. Every culture and family is unique. Saudi is different from Egypt which is very different from Lebanon. In addition, my experience as a white American female is not comparable to that of a contemporary Arab female. Egyptian women seem always ready to speak out in a stronger, more direct voice then mine own. They have a powerful character, yelling out against injustices, demanding the things they desire. Yes, even the more conservative, veiled Egyptian women I have met step up and speak their mind. Demure being only one trait in a multi-faceted lifestyle.

Then there is the way Egyptian women can dance. 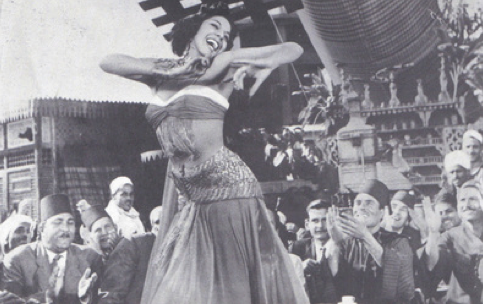 I ask you to click here and promise to watch at least half of this video. Go to  anywhere in Cairo, from a nightclub, to a children’s cancer ward, to a seedy cabaret, to an esteemed ballet institute; and you will see women and little girls boldly shaking their hips in intricate patterns and flirting with their eyes and hands. I was told it was mostly about the hands. Some women dance for tourists, some dance socially with men, some whip off the niqab at home and dance for their husband,  and some dance freely but only with other women or children. Men also bellydance but more often hop, kick, clap, and in those cabarets, shower the lady in cash money.

Last night, I and a large number of my friends watched Makers: Women Who Make America on PBS. Loved this program. It swept me up in inspiration, and reminded me of the revolution already in my lineage, as an American woman, a fine woman says my boyfriend. I’m dating an Egyptian man and am certain to do no more than 50% of the housework. And to be honest, I probably do less than that; closer to 40/60. In love and life and dishes, we agree to meet each other half way.

My belief is that the Arab Spring and the Arab Women’s Liberation need to be simultaneous, not sequential. As new constitutions are drafted around the region and coalitions created around shared values, now is the time to address the issues that effect all of society: an end to sexual harassment at the workplace and on the street, legal and socially-accepted age for marriage, healthy family planning, abortion, equal pay for equal work, desegregation, equal opportunity and more choices, the right to sexual enjoyment, legal and physical support for women abused, divorce, adoption, education, mobility and freedom to travel, campaign support for female politicians, education, women in the police force and active service in the military, transgender and homosexual rights, microloans for female entrepreneurs, on and on.

What we in Cairo undeniably share is a problem with harassment. Mostly verbal, but in many cases devastatingly physical. To the point of sexual assault and rape as weapons of intimidation both to the individual women but also to the movement. We can take this on together. We must.

It’s a balance between respecting culture and religious choice, (for me, agreeing to not touch a man in the Qatar Ministry of Foreign Affairs in a picture)… 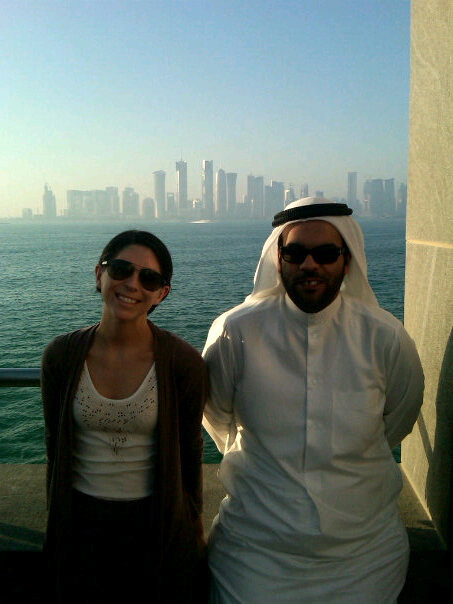 and taking charge of your sexuality and your self. 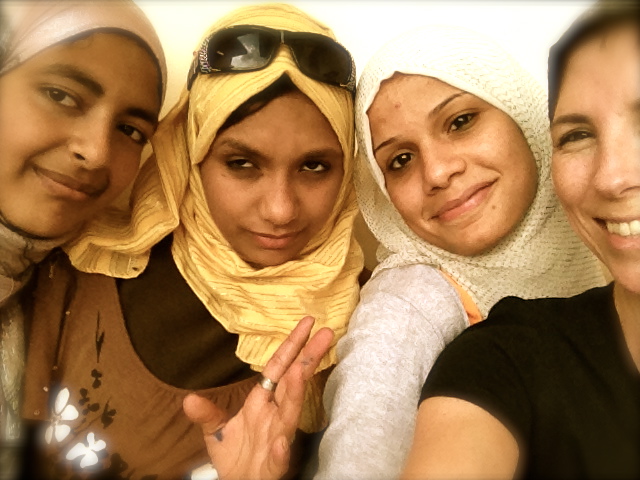 A group of friends: Egyptian young women and myself.

Page 43 of Cairo: The Practical Guide by The American University in Cairo Press

“Women’s Lib[eration] has not had quite the same impact in Egypt as it has in some Western countries. This produces some charmingly chivalrous behavior towards women on the part of men–opening doors, carrying packages, etc.–but can also cause the poor things some embarrassment if a woman offers to or insists upon paying for dinner.” 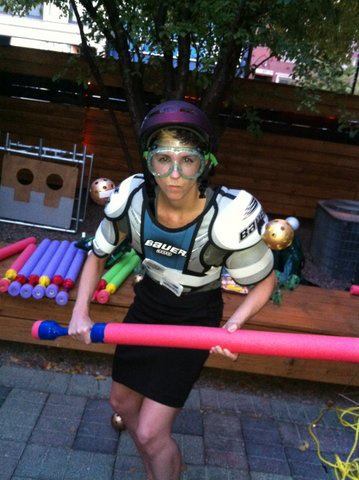 Even good friends of mine in Cairo are bothered by where I choose to walk in relation to them on the street. Yes, I hop up and down curbs, sometimes even skip and dance in public. Friends and strangers both get upset, when I get upset, when they insist on taking the heavier bags out of my hands. Sometimes the challenge of carrying things is extremely enjoyable. Can’t be the only woman or girl here to think so.

I’m not lady-like and don’t aspire to be. Once in awhile I can pass it off, almost like playing a character, but it doesn’t last long. Please understand this is not just a gender issue for me. I prefer to try to things on my own and then ask for the help I need. Whenever someone, male or female, has the job of tending to me, I get mighty uncomfortable. Asked to fetch my tea, prep my seat, clean up after I leave. My dad is a school custodian. But more than that, a community builder. He taught me everyone lends a hand.

The Cairo Guide goes on to say, “Defer to the custom of the country or your male companion’s sensibilities on this issue.”

Oh yes, men’s sensibilities. I apologize in advance, gentlemen and authors of the Cairo Guide. Couldn’t defer if I tried. And I did try. Will probably offend your sensibilities often and I probably won’t participate well in these aspects of Egyptian culture. 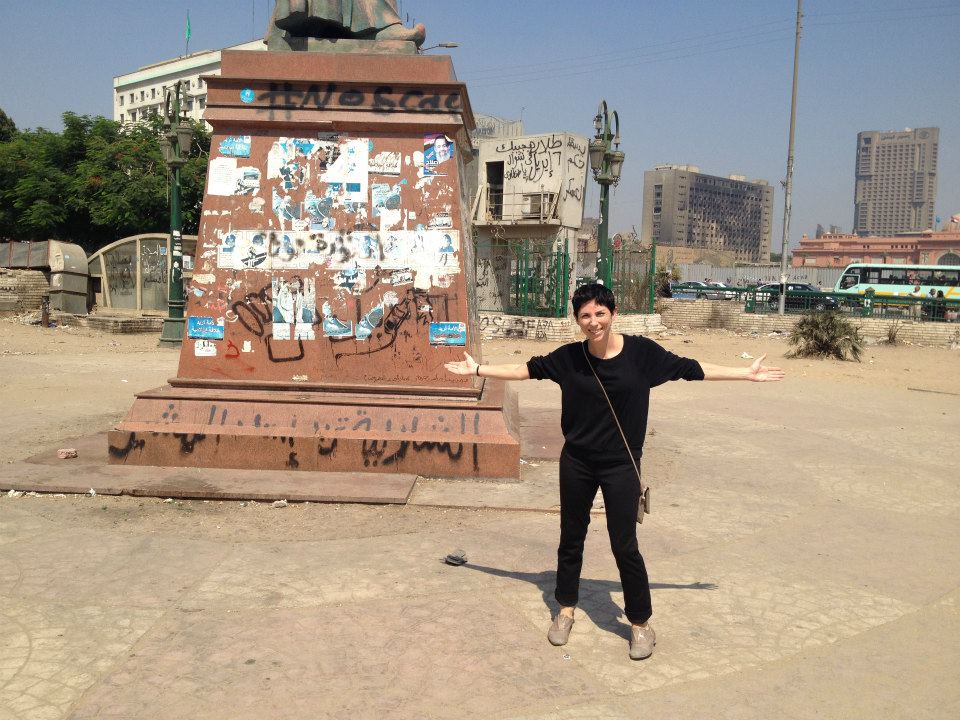 For reference on where I’m coming from on this matter, here I am with one of my favorite dance students back in Chicago. I once lifted him on my back so that he could feel some weightlessness, release, and the dance concept of weight-sharing. He is an amazing guy and an amazing dancer. We found a way to be equals, as teacher/student, as different body-types, helping each other. 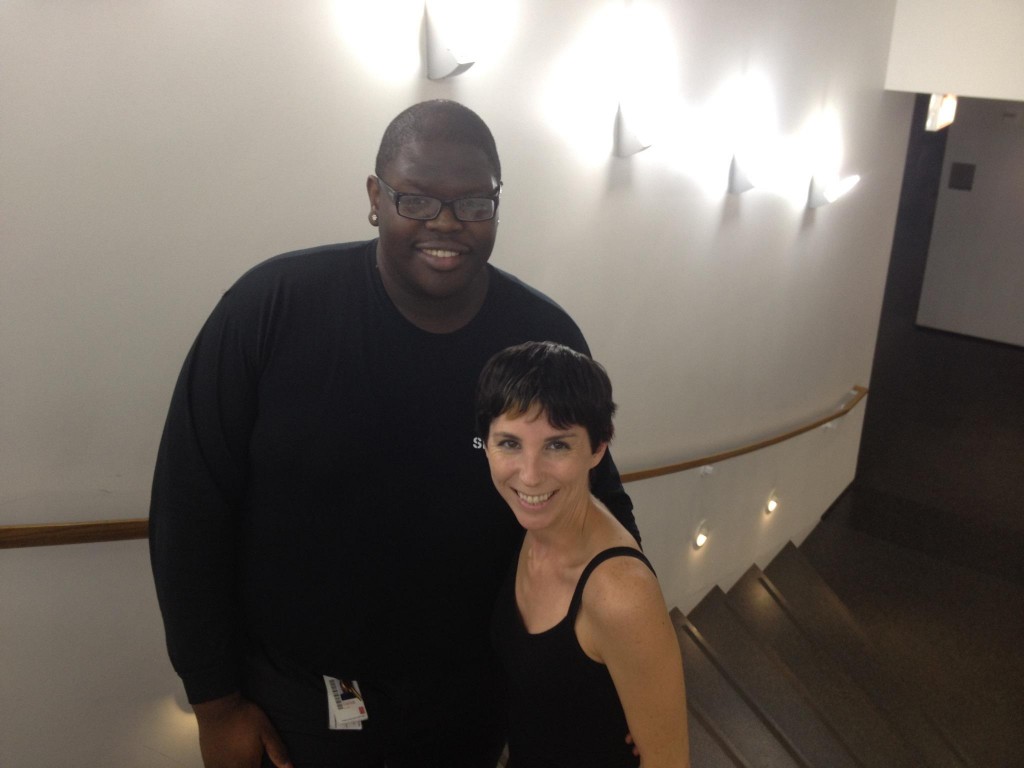 Actually it was more than ok. It was one of the coolest things.

I was enjoying my shrimp fajitas alone at TGIFriday’s on the Nile when a brilliant, nearly 14-yr-old girl from Aleppo, Syria came over and sat with me. Confidently and out of nowhere. Bright pink hijab and a bright smile. She and I chatted for nearly an hour. We had a blast.

She wanted to practice her English. And her entire family was at a nearby table: only her father speaks English but not to her level. Someday she wants to study in America or Europe. Her friends don’t seem to understand that she will be safe and that not everyone in those countries hates Muslims. That’s what she told me.

She asked me how old I was. 34. She asked me if I was married. When I said no, she asked what was wrong. I told her about failed attempts at relationships, and about doing good things in the world. We gossiped a bit about guys. She told me about a fight she had with her boyfriend back in Syria. She asked me why I had short hair. Shaved my head for St. Baldrick’s. I told her about Donna and Shea and the other children who have battled, will battle, are battling cancer; she lit up and said she wants to be a doctor and volunteer.

We laughed about how slow the male waiter was with bringing the check, even though I asked several times. I said I might just do it myself, write down on a piece of scrap paper what I ordered and leave the paper on the table with the cash.

It was in this silly moment that I felt like a real role model. An amazing feeling. And in one mere hour, she taught me a lot about being a powerful teen, Muslim young woman, aspiring doctor. She told me she likes Jennifer Lopez and Eminem. I told her about Lupe Fiasco. She said she was worried about her friends back in Syria and that she wants to keep in touch with me on Facebook or e-mail.

Hope she has a great birthday on Tuesday. And I hope she knows that my writing about her is because of how much our conversation meant to me. We are 20 years apart but kindred spirits. Her family has been here 20 days and I hope they can return to a safe and bright Syria soon.