I was struggling to breathe. Wherein I had been worried for months that Trump would find a sneaky way to win, I had been reassured it was impossible. I had spent the day in a pantsuit applauding Hillary Rodham Clinton’s great assets and potential. And here I was on my couch witnessing a presidential ticket which had attacked 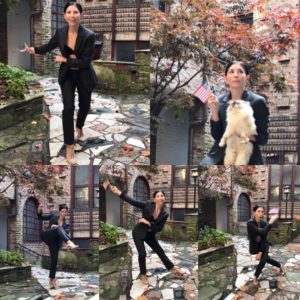 the truths I hold to be self-evident winning more electoral votes than the more qualified candidate with more policies of equity and respect, the more experienced public servant, the country’s would-be first female Commander in Chief. Finally!

The unthinkable was happening, and my dear home of Michigan held the future in its grip. All this “grab them by the [email protected]” talk had been triggering some trauma in me as one of this country’s mass of sexual assault survivors, plus the Trump/Pence policy proposals were directly threatening my family and close friends; then to have this vile, misogynistic man being declared a winner in my home state was particularly sickening.

My understanding of the values of this country was being violated and I felt it gradually ripping under my skin.

The pain hit as hard as the shock.

It was hard and continued through the night.

We weren’t going to stand for it. Yes, democracy is glorious and the electoral college was the agreed measure going into the election, but I was not claiming that a president whose policies, rhetoric and behavior are so unAmerican represents me. He (now) questions climate change, has threatened to dismantle the National Endowment of the Arts and discredits the value of the arts, disrespects entire groups of the population, and he and his running mate have advocated for measures that are nearly state-sanctioned oppression. In addition, he is an adulterer, not paid taxes to some level, had his wives and nannies raise the kids, and has led an ostentatious life of privilege and self-interest. I cannot even fully list all of his actions, statement and policy proposals that disgust me. His voters seemed to be okay with all that. A vote for Trump was a vote condoning racism, sexism, nativism, and more. A vote for Trump was prioritizing jobs over rights, a government shake-up over human decency, bridges over bodies.  I was fuming.

Then I was stopped cold. Two days into petitioning and questioning and trying to reach out to those who caused this devastating result, I received a heartfelt, thought-out message. It was from a good friend who is both an artist and a woman, in a major US city, revealing herself to be a Trump voter and explaining why.

“Six months ago I never thought I would vote for him. But in the end, I did. I believe in human rights and equality for all. As an artist, I dance because I believe the arts unite us and remind us of our humanity. I think art has the singular ability to bring peace, to remind anyone and everyone of our capacity to feel, empathize, and love. I cannot admit to my artist friends I voted for Trump because I have no doubt it would hurt my career.

“I am an Independent voter. I strongly dislike the two party system. Initially, I was appalled by the two choices, believing Trump and Hillary to be two sides of the same coin, but as I dug deep and did my research, and most importantly stopped trusting the mainstream media, and started going to the source of any and every statement, particularly reading things in their original context, I decided to vote for Trump. I also learned earlier this year about the federal govt. vs state governments and was shocked at how little I actually knew about which had power in various circumstances,… particularly in education.

“Unfortunately, there are extremists who also support Trump, the KKK being the prime example; though Trump did not want the endorsement (he also did not dismiss it entirely). I think it’s a good thing that we are seeing that these terrible views still exist. But I wonder how much of the racism and violence–violence on both sides– is the result of frustration and a human reaction to hate the other for problems beyond any one group’s control. I am appalled by the tribalism that has taken a hold of the country–aren’t we all Americans?

“Yes, I realize that many people are afraid of Trump because they fear they will lose their rights–I am not ignorant of that. I hope Americans, Trump and Hillary supporters and everyone in between, do as Bernie said–support Trump in his policies that support the middle class, and call him out when he tries to do anything that would hurt minorities/women/immigrants or the environment. We have 3 branches of government for a reason, so that one single person cannot make drastic changes to this country.

“No matter who had won, the country would have remained divided, and I hope we can all work together as Americans to build a stronger America. The U.S. has never been a perfect country, I am not looking to a past that was supposedly “great,” I look toward a future where we all work together to right the wrongs in this country, where we look at all people as human beings, where we recognize difference but do not judge because of difference, an America where neither class nor ethnicity nor sexual orientation nor sex limit us in any way.  If we’re too busy hating the other, or telling them they’re wrong and ignorant and don’t know what’s best for them, we cannot work together to find solutions that work.”

I was surprised and humbled, and I’m still trying to hear her out. Simultaneously, I told her President-elect Trump and VP-elect Pence must denounce the hate crimes being committed in their name and restore confidence that they will uphold the 1st and 14th Amendments.

Then I reminded myself that our Constitution and our government are on our side. Today the Obama White House has put out a list of available federal resources for reporting hate crimes, bullying and harassment of students, and threats against houses of worship. Use these if needed, my friends. No matter who you voted for. And send some donations to Planned Parenthood or social justice organization while you’re at it.