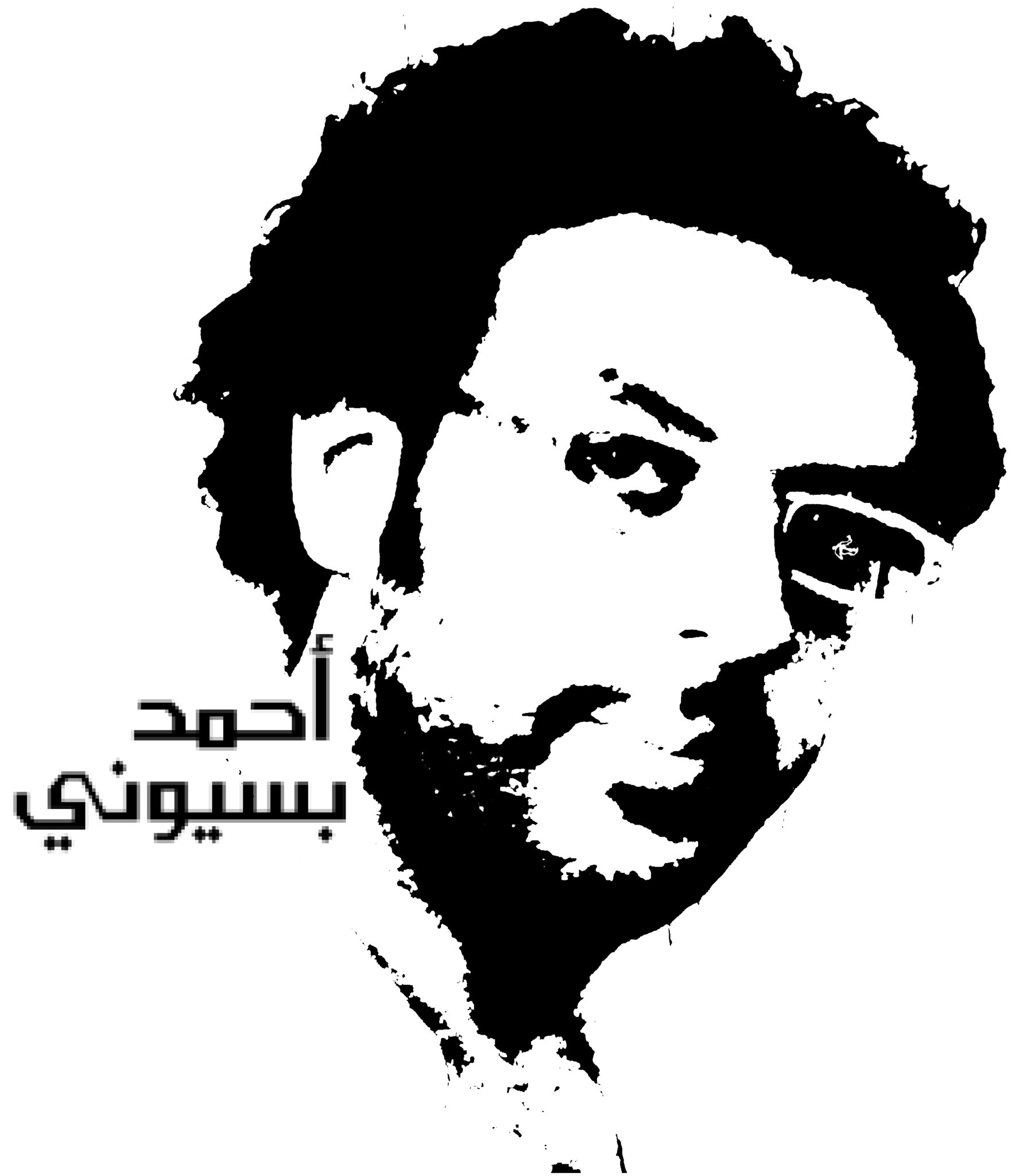 Yesterday, I had the honor of seeing a memorial exhibition for the artist, Ahmed Basiony. I was accompanied by one of Ahmed’s close friends and could see the pain in his eyes at every piece, every article of clothing on display, his videos, his white rubber boots.

As Shady El Noshokaty describes, Basiony is considered one of the most important artists of the new generation of contemporary Egyptian artists. After acquiring his master’s degree in Creative Potential of Digital Sound Art, he was working on his PhD Thesis on The Visual Aspect of Open Source Programming in relation to the concepts of digital art. His practice varied greatly and evolved rapidly. His early large-scale expressionistic paintings. Then his work took a turn in a more experimental direction involving new media and multimedia installations.

On January the 28th, 2011, Ahmed Basiony died of gunshot wounds inflicted by snipers from the Egyptian Police Forces on Tahrir Square during the start of the 25 January 2011 revolution. He left behind a wife and two children (6 and 1 years old). 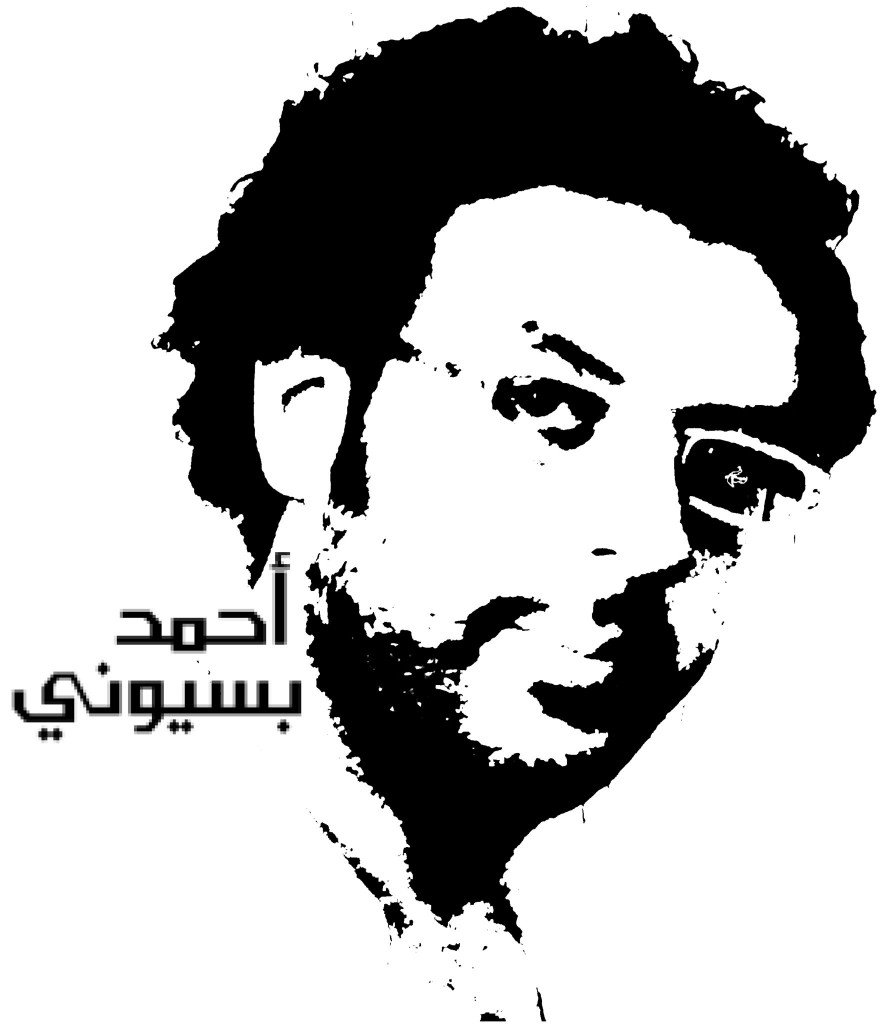 His last statements on his Facebook page: I have a lot of hope if we stay like this. Riot police beat me a lot. Nevertheless I will go down again tomorrow. If they want war, we want peace. I am just trying to regain some of my nation’s dignity. January 26 at 10 pm

It is necessary to be fully equipped while participating in the revolution: a bottle of vinegar to overcome the tear gas, protective masks and tissues to inhale vinegar, self-defense sprays, athletic shoes, Pradoral tablets, food and drinks… It is prohibited to use violence against security agents and to insult them. Vandalism is also forbidden for this is our country. Bring a camera with you and don’t be afraid or weak. January 27 at 12:09 am

In 2011, Basiony was selected post-mordum to represent Egypt in the Venice Biennale 2011. And now his friends celebrate his life, his companionship, his genius and his legacy with events throughout Egypt this month.

Just a short taxi ride away from the exhibition, 21 of the liberal and secular parties came together for the first time. They took to Tahrir Square to reclaim the original demands of the revolution and to protest the acquittal of the perpetrators of the Battle of the Camel and Morsi’s recent firing of the prosecutor-general. Young and old were in the square, literally babies and men with canes. Standing with a unified message. The U.S. Embassy sent a report that stated 8,000 people were out there. But a majority of the crowd packed in to Mohamed Mahmoud Street, just past the Hardees. Every couple minutes, a kid would be rushed back towards where I was standing safe on a curb. Strangers would get the injured guy medical care for some sort of rock wound to the head or face. The man next to me was bleeding from the back of the head, covered with a loose and inadequate bandage. This was not going to be the peaceful mass demonstration the liberals needed.

Mohamed Mahmoud Street has been the scene of the heart of the violence over the past year and a half. Plenty of blood spilt for various passions. Each time, a different enemy on the other side: Pro-Mubarak, SCAF, Pro-Morsi… 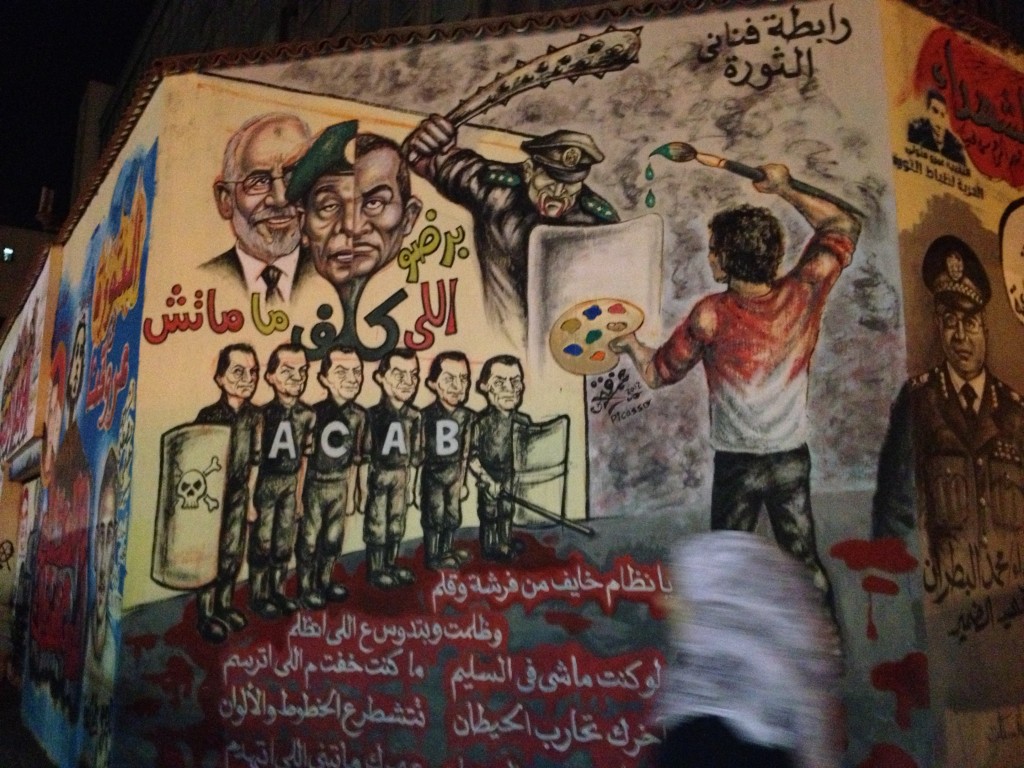 Mohamed Mahmoud Street is also the home of the most elaborate and honored graffiti art in the city. Public murals with revolutionary messages. After the events here last month that started at the U.S. Embassy then went into Tahrir Square, all those murals were whitewashed. Saddening. Last week, artists, men and women alike, in the middle of the night, came with their paintbrushes and ladders to defend the progress of the revolution. As AhramOnline reported last month, “They are erasing history, Gamal Abdel Nasser, the father of a 19-year old killed during the early days of anti-Mubarak protests, said as he stood at the [whitewashed] mural street. And for some, repainting the wall just underlined the feeling that the Islamists have snatched the prizes of the revolution. This is not about the wall. It is about everything happening in Egypt.” 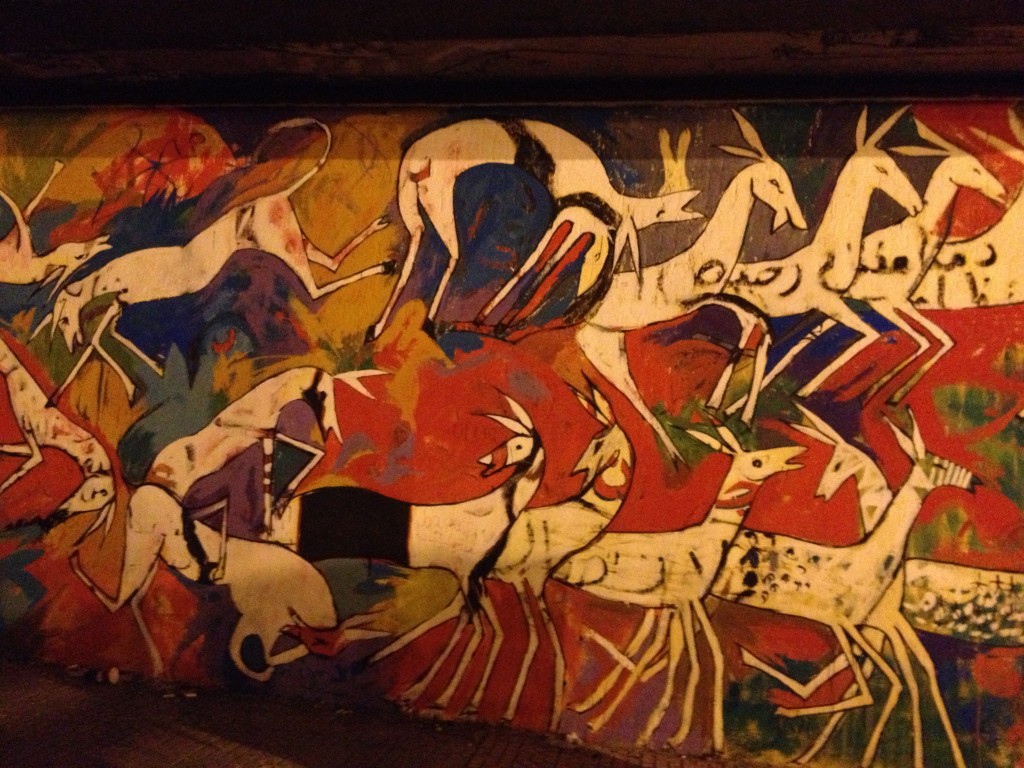 At the far end of this same mural street yesterday, the liberals and secularists, the people who had first put the revolution into motion, were fending off the Muslim Brotherhood (MB). I couldn’t see that far down the street, but heard reports from the taller folks in the crowd. My friend who was with me could pretty much sense what was happening without looking. As more and more men were brought back with wounds, and ambulances started to crawl through the crowd, we decided to leave.

I spent the rest of the afternoon monitoring Twitter for news of injuries, movements of the MB from other areas into the heart of the square, tearing down the stage, claims of gun shots and maybe one death. My friends and I turned on local television and saw as the violence escalated in the heart of the square, to an embarrassing level. Egyptian v. Egyptian. Men in suits and casual, liberal clothes versus men in more religious wear. No police or security pretense whatsoever. Molotov cocktails. Buses on fire. Groups running in different directions.

The MB claiming their members were not in the square.

My friends and I spend the evening in conversations far away from the area. We talked about contemporary art, how to plant the seeds of progress during such a turbulent transition, about deep-seated hope, about Morsi and his party’s dealings, what Nov 4 elections will mean for Egypt, the World Bank, and how friendships are made and sustained here.

I kept having this thought that we need to have a day in Tahrir Square where thousands come to dance. To dance their hope, their anger, to grab hands and find counter-balance with one another, and then to boogie.

The media coverage for most of the rest of yesterday evening was of the MB chanting peacefully in front of the court building. They were the faces we were left with at the end of the night. This is not the unified power the thousands of secularists and liberals had planned. I said it felt like the day had been hijacked. Then, this morning, I turned on the tv to see what people were saying about this chaos a day later, but all I saw was the eerily symbolic message,

“We are sorry for the loss of service which is due to sun interference with our satellite. Thanks for your patience.”