Yesterday was September 11th. I blogged about a seemingly everyday sort of experience. And people responded.

But the day turned an incredible corner.

As the evening settled in, there was a buzz in my new neighborhood, Garden City, which is the home of many embassies.

Around 7pm, I was home watching CNN when they reported there were thousands of protesters around the U.S. Embassy Cairo, which is just up the street from my apartment. I put on a simple black t-shirt and black jeans, smoothing my pixie cut, so somehow to look more self assured. The promise I made to myself and to my friends was that I would leave as soon as I felt any vibe of things being unsafe.

Well, me with my 5’1″ frame walked right into the heart of a massive anti-American protest and the storming of an embassy. Not because I’m naive or a risk-hunter, but because I was compelled that this is where there are the conversations that need to be had. This is the type of diplomacy I’m good at.

The men were chanting, screaming. Some were sitting along the embassy wall. Some were perched on the entranceway chiseling away the U.S. seal and lettering, replacing them with Bin Laden and the United States of Muslim, to the applause of the crowd below. I was the only American lady there in that main section at that time, that I know of. But people were quite calm and nice, oddly.

Many Egyptian women were in the back of the crowd, in full abaya and niqab. I went up to one of the young women and asked her to translate her sign. Our conversation was brilliant as we realized that we had the same opinion on hate crimes. And when I said I also consider attacks on Sikhs, women, homosexuals, Americans, and transgender people hate crimes, she genuinely agreed and translated for her sister and mother.

As I thanked her and went to walk deeper into the heart of the male crowd, she said, “They will eat you alive.” 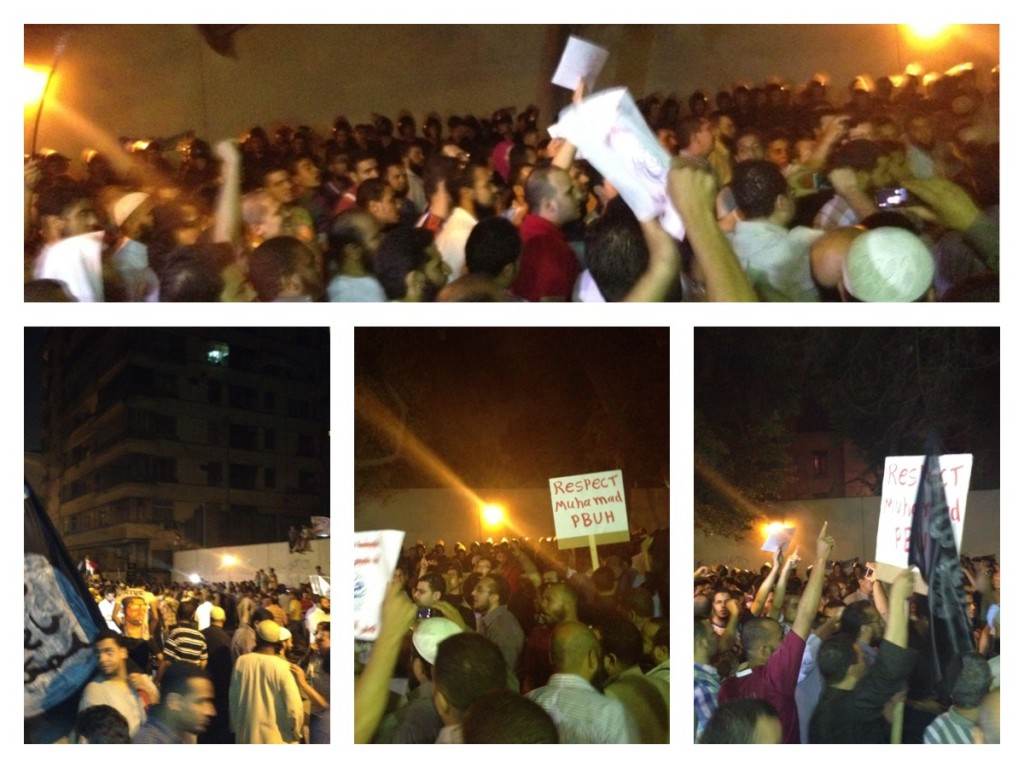 The wall of the embassy was spray painted with “[email protected]#k Off U.S.A.” and the old slogan “khaibar khaibar oh Jews the army of Muhammed is coming.” The US flag inside the embassy walls had been replaced with a black flag that was very similar to that of Al Qaeda. There were flags burning in the crowd, but in general, the atmosphere was calm. I got a few men looking at me with a confused glaze, but was treated very well.

Surreal how gracious and welcoming the Egyptian people can be, even to an American who shows up for a minute at the anti-American event.

As I watched a few Salafi men destroy the entranceway, I felt a deep saddening and walked stunned right up to the front. I asked a young man why such actions were necessary in reaction to a wack’s homemade film. What did the U.S. diplomats in Cairo have to do with it? He couldn’t really explain but was kind. He handed me a cup of tea. He kept saying I didn’t know anything of Islam or Arab culture. When I proved him very wrong, his respect was evident and we continued on to a poignant conversation of religious understanding and tolerance on this very poignant day.

I felt very safe. But after another chat or two, decided it best to leave before things got out of hand. Walked home alone just fine as a beautiful breeze blew along the Nile.

My mood was actually charged from those important conversations.

This morning, the news is nothing but saddening. A similar storming happened in nearby Benghazi with looting, damage inside the interior buildings, a massive fire, and the death of 3-5 people, including the U.S. Ambassador, J. Christopher Stevens.

May they rest in a loving peace.

And may we all live in a loving peace.

I woke up to the following messages from my Egyptian friends, “I am so sorry. But many of Egyptian people are ignorant. They don’t know why and where they are going. Just following the wave. I wanted u to know that not all Muslims think this way. I support Obama and have read that what happened increased Romney supporters.

Plus the director or the producer of that film is Egyptian, so USA did nothing. And most Egyptians aren’t that religious.”