Standing Up for the National Anthem on AlJazeera

Today is Friday. A day when I would describe it feels like the world is on fire. It is a sadly familiar fire.

Last night, I went to Cairo Jazz Club with an Egyptian friend, his new flatmate and a charismatic French mother. We all boogied to 90s Night. Beck, Dave Mathews Band covers. Discussed the protests. Felt a bit of the burn of tear gas wafting in the air. But were happy, even knowing the MB was calling for a large demonstration after Friday morning prayers. The dancing in the club was certain, in a very uncertain region.

Today is Friday. And I knew things would/could get pretty bad. So as the Fulbright Commission suggested I do, I had a “safe and happy weekend away from the Tahrir square and the U.S. embassy area.” Well, the second part was more difficult to do because my apartment is in the embassy area. Today, I took the long taxi journey to Maadi to attend a yoga open house at The Breathing Room, a clean and studio surrounded by green and smelling of peaceful essences. The classes were difficult and demanded a Zen-like focus. It felt great to sweat, to breathe cleaner air, to get back into my body. 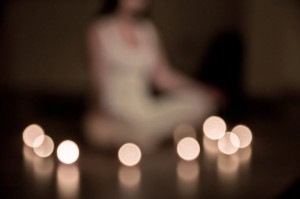 Tonight, I barely get off the couch.

I post the following on Facebook:  I was just about to de-friend all of you posting images or using rhetoric calling for a bullied attack on Libya. But I will refrain and try to stomach the hate I am hearing. Instead, I will combat it with personal truth. I will just tell you that I have good friends in Libya, which is just over the border from here. They are awesome. Businessmen, poets, and people fighting for civil rights including for women and the LGBT community. Yesterday, Libyans took to the streets to apologize. I don’t remember Americans ever taking to the streets to apologize for a war in Iraq or drone casualties. And for all the protesters here in Cairo with anti-Obama signs and chants, I must say thanks (with a whole lot of sarcasm): http://youtu.be/O7VdrtFAuyA

I read as my Muslim friends (American, Libyan, Egyptian, French, Tunisian, and Dutch) step up as responsible voices and explain, defend their beautiful faith. Then I turn on TV and see extremists and passionate idiots burning pictures of Marilyn Monroe, attacking a Hardees, and reviling some character named Obama Bin Laden. So I write to an Egyptian friend: I am going to show my ignorance here but I am confused. Are all these anti-Obama signs and chants here in Cairo actually pro-Romney? Pro-Bush? Hasn’t Obama been the one to open up new communications and trust? The use of drones where civilian casualties at risk is certainly wrong. But before Obama was a time of preemptive war with an anti-Muslim spin.  He responds: LOL .. I have the same ignorance too .

I’m not interested in politics but I know that the most of those protesters don’t know the deference between Obama and Romney .. They just follow the fanatic clerics .. They believe in destroying buildings the best way to expression.. !!
I sit on my couch and watch the live streaming from Tahrir Square (blocks away) just as I watch live streaming from Washington D.C., as four patriot bodies are welcomed home. Secretary Clinton steps up to the microphone and speaks right to my heart. In a way, she is my boss. As a Fulbright Scholar with an Egyptian work permit and residency visa, I am here with the U.S. Department of State and the Binational (Egyptian/American) Commission.As a kid, I said I wanted to be a dancer and politician when I grew up. When I was 7 or 8, I even dressed as a politician for Halloween. Campaigning to be the first woman president; as Hilary would later do. When I went out trick-or-treating that year, I gave out flyers and refused to take candy. And I have to say, that being a Fulbright Scholar, teaching community arts and dance in Cairo, Egypt right now feels like a step in that journey. Dreams coming true. A journey where I get the honor of being friends with amazing people of all different faiths and races and nations.

Back on AlJazeera tonight, Secretary Clinton says that as a civilians representing America abroad are “a force of peace, progress and dignity.” I keep saying those words to myself for a half hour after her speech. A force for peace, progress, and dignity. Those concepts will help us all in the days to come. I have a feeling. Then President Obama speaks of the four amazing men we lost. Amazing. This is followed by the National Anthem.

And out of respect for this whole worldy situation, alone in my apartment and yoga gear, I stand. 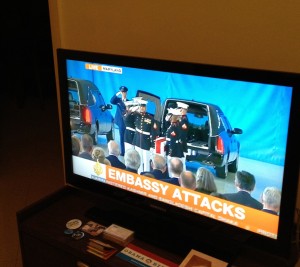 P.S. I have no idea what I will be for Halloween this year in Cairo. Maybe I’ll just be myself. 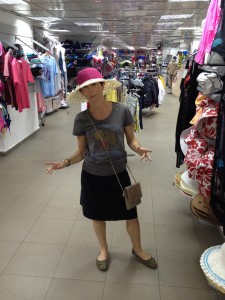 Playing with hats in a Cairo grocery store.