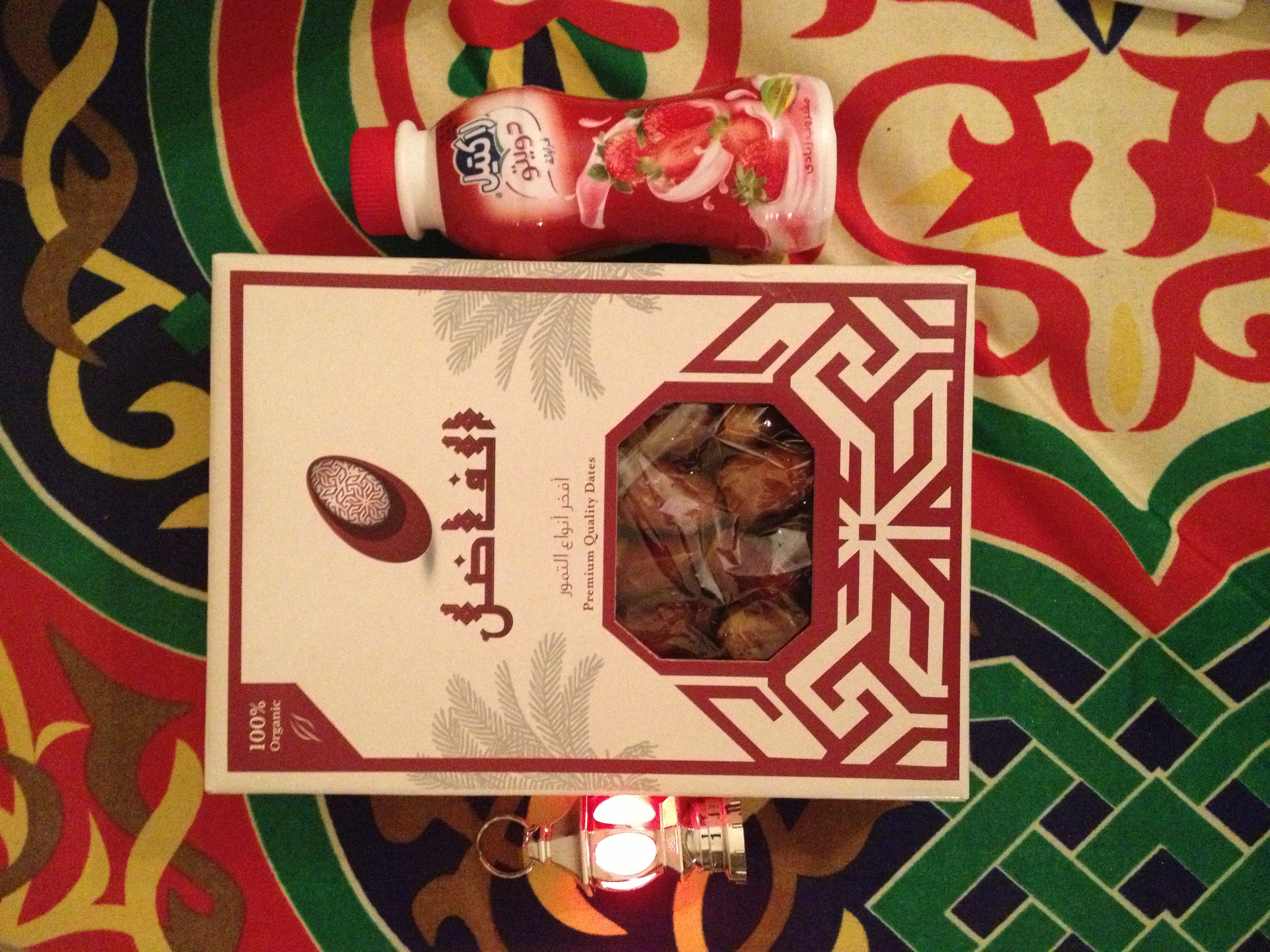 In Egypt, there’s never been a better time for replenishing the soul. Welcome, Ramadan.

The first sign it was coming was the emergence of lantern shops last month. Beautiful lanterns ranging from pocket-size to people-size. 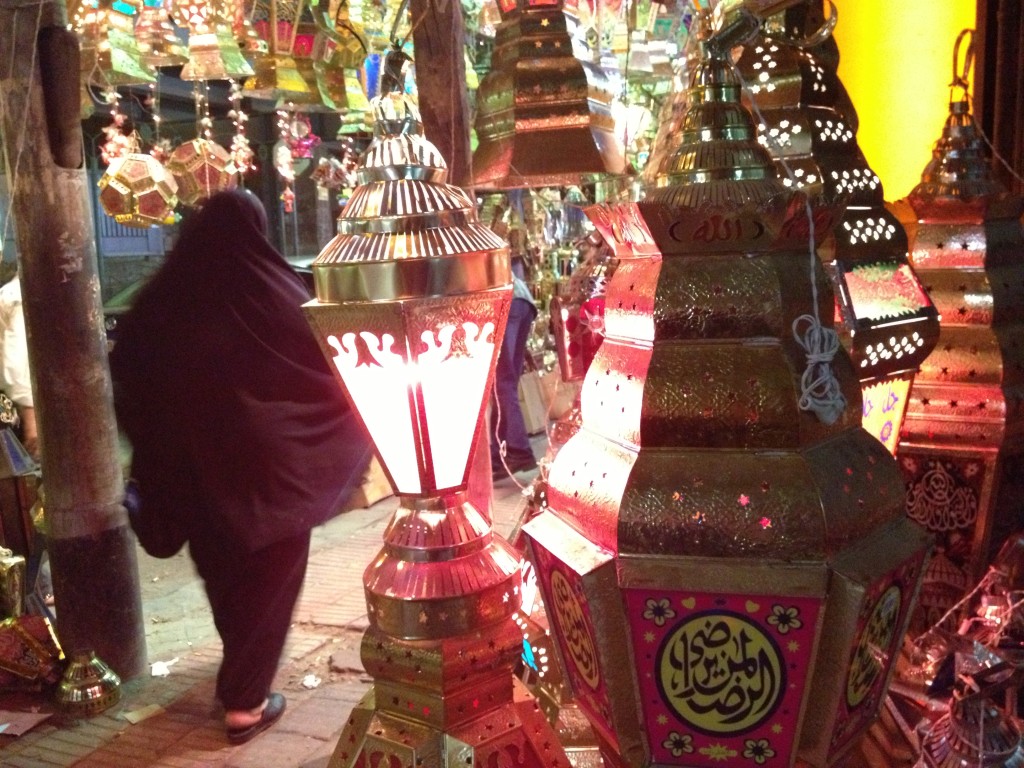 Then you would see more and more dates (the fruit) and Ramadan fabric being sold on the shelves. Then you found the organization you work at setting a different schedule for Ramadan, avoiding activities in the early evening.

Ramadan this year here falls in the midst of a revolutionary transition and between two Coptic Christian fasting periods as well. Lots of activity for one’s spirit. I am not Muslim, or Coptic, but I am proud to be participating culturally. Fasting and praying daily. Ramadan commemorates the time the Prophet Muhammad PBUH (Peace Be Upon Him) received the first revelations from God.

So at 3:19am every morning for a month, the 1.6 billion Muslims in the world, ‘the umma’ start fasting. No water, no food, not a morsel. No smoking. No kisses or affection. Until 6:59pm in the evening. Every day for 30 days. The set times are different for each place and keep changing depending on the crescent moon and sunrise/sunset; so a person has to either get the app, Google the prayer time chart for their particular country, or simply listen out their window for the calls to prayer.

Also, for the entire month, there is no alcohol, no sex. A person abstains from bad deeds and seeks humility, empathy, self-discipline, charity (giving alms), community service, and a closeness to God. It is a month of cleansing the body, replenishing the spirit. A time of soulful reflection. 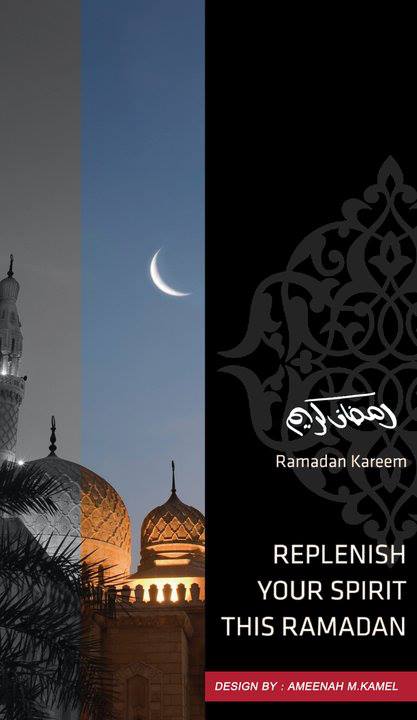 This is My First Ramadan. I have lived in Muslim communities before, but this is my first time participating. It is mandatory for all able Muslims (those exempt include those who are sick, traveling, children, women who are pregnant, breastfeeding, or on their period). Others, like me, do it for the experience and for solidarity.

As a Lent, you would think fasting would come natural; but no. My first question was if I could brush my teeth. The answer was yes.

So around 2:00am every day, I join my roommates and friends for suhoor, the pre-fasting meal. Usually we have foul (beans), bread, salad, tea, water and yogurt. The whole city seems to be out at that time. Children playing soccer in the streets. Houses decorated in lights and lanterns. Restaurants abuzz. Even though this year seems to be a bit heavier with political dialogue, it is a beautiful time.

Then after a long day with no breakfast or lunch or coffee, I break the fast alone with the traditional water and three dates. You will not believe how amazing these little fruits are after a day of an empty mouth and stomach. A-ma-zing! Then I join friends for Iftar, the big meal.

My Ramadan kit: one pocket-size lantern (a gift from one of my ballet students), a box of organic dates, a sheet of the bold Ramadan fabric, and bottles of yogurt drink. 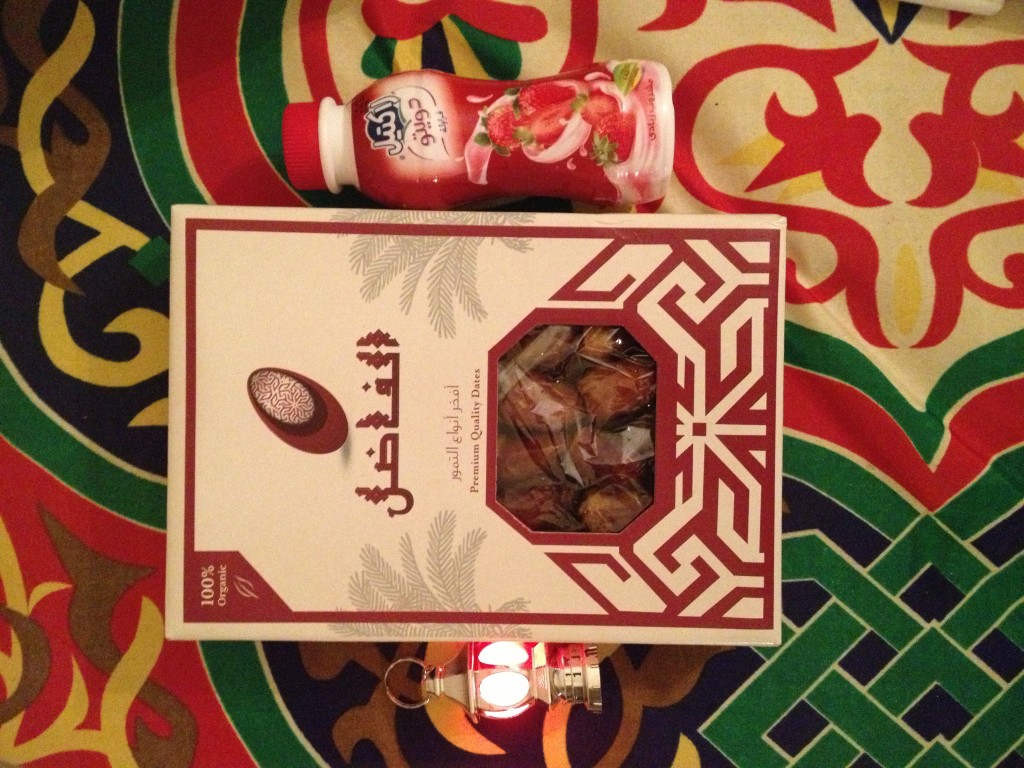 Today marks one full week and I am doing rather well. The easiest part has been no food. Going without water has been a bit more difficult, especially when active in this heat (consistently around 95 degrees). Yesterday, I broke down and drank some H2O when I nearly fainted while standing on the crowded Metro, after a 40-minute walk. Found out it was ok to drink if a person is out in the sun; plus the day can be made up later. And I’m definitely missing having a cold beer on the weekend. But the hardest part for me has to be the no-kisses.

Despite the togetherness promoted by the holiday, Ramadan is a personal journey.

And I must say that I feel safer in Egypt right now than unemployed in the States. The honor of being here for both revolution and Ramadan is immense. I am so mighty grateful for the love, friendship, purpose and camaraderie I have found. Everything has slowed down; tempers and tensions are cooling. The only time I felt nervous for my own personal safety were the three days leading up to June 30. According to the large banners all around Cairo, Egyptians ‘X’ the Obama Administration but ‘HEART’ the American people. A cab driver told me I could pay whatever I wanted and the grocer gave me a complimentary handful of candy. Ramadan has also brought less harassment when I walk down the street. Maybe people are giving me credit for sticking with them and not fleeing. Five women have been appointed to the interim Cabinet and will hopefully forge a path for future progressive and female leaders and their voters during the 2014 elections. And everyone is back to work. The artists’ sit-in was successful and they should be moving out of the Ministry of Culture shortly. The MB/pro-Morsi protests do continue but they increasingly trying to appeal to Western media by creating signs in English and switching their message to #Anti-Coup. Their protests have instigated less and less violence but their numbers are big. Last night, the police used tear gas to disrupt the crowd.

Revolution is not easy. Neither is Ramadan. But hopefully both will lead to greater self-awareness, empathy, freedom and generosity.

So to you I say, Ramadan Kareem (Have a generous Ramadan).