Living in a place not your home can get difficult. No matter the place.

No matter how many times strangers on the street say “Welcome to Egypt,” you can feel like the odd man out. Love the challenges. But it’s no walk in the park when even a walk in the park is an adventure. Constantly out of your element.

Today started off as one of those down days. We all get them. We all feel down. Egypt only has four beer options (Stella, Heineken, Sakara, and Meister Max), all local, and I was officially tired of them all. Craving an IPA or a good craft brew. My shoes were not warm enough to sit at one of the outdoor cafes. It’s cold. Verging on rainy. The wind yesterday was epic. The tents in Tahrir Square flapping violently. And I craved to have those boots I had back in Chicago that boosted my swagger. So I decided to stay home and pack up the Fulbright apartment (given to me September 2 – January 15).

And as I was packing up, my mood started flipping. I kept finding mementos of the last four months…

One ticket stub for the grounds of the Pyramids of Giza and the Sphinx; plus one ticket to go inside the second-largest, second-cheapest of the three pyramids.

Three language workbooks from the Arab Academy, full of notes and some of the worst Arabic spelling known to man.

One handwritten note passed to me by a teen patient at the Children’s Cancer Hospital 57357 that reads, “I dreamed that you and I were married, but this is just a dream. I’m happy with this dream.” 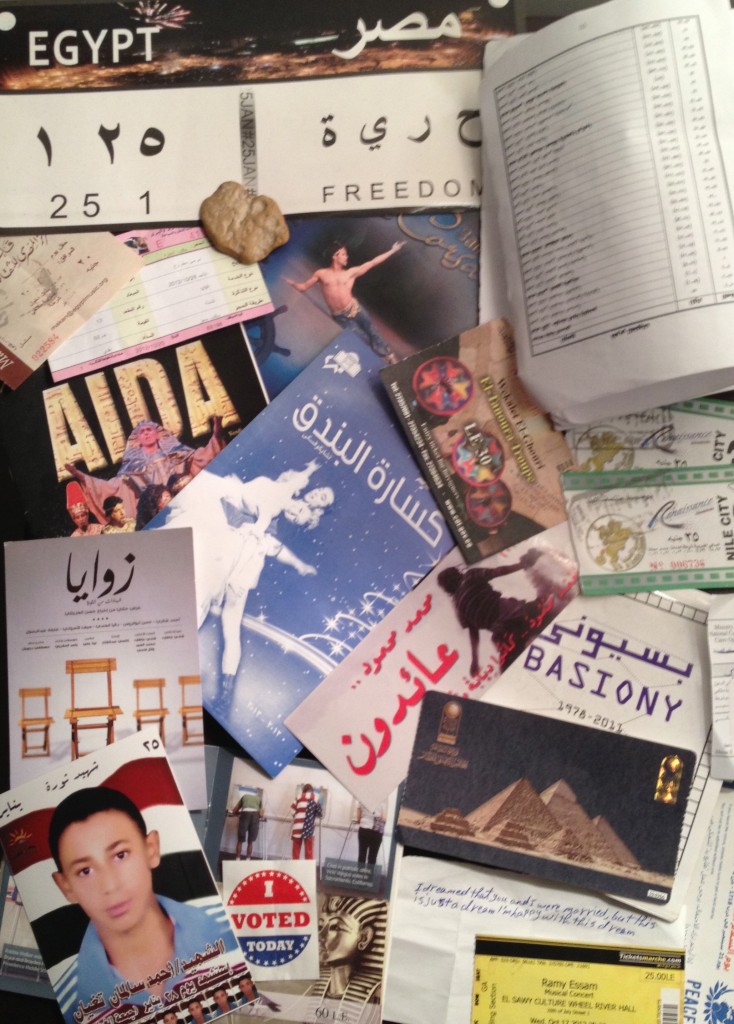 Seven underground, revolutionary bumper stickers and one poster, with the purpose of getting the word out about the November 23rd demonstrations in Mohamed Mahmoud Street.

One large Egyptian flag found on the ground in Tahrir Square, rescued and repaired. (I may or may not have waved this flag boldly when alone in my apartment.)

One ticket stub for “Wekalet El-Gouri, El-Tanoura Troupe” Sufi dancing, another for a traditional music concert at Makan, and another for a heart wrenching play, “Zawaya: Testimonies from the Revolution” at Al-Warsha Theatre Group Premises.

One stoic picture of Ahmed, a 17-year-old who was martyred during the January 25 Revolution.

A worn copy of the 30 November version of the draft Egyptian Constitution (which was expedited and questionably passed in December), and a list of all its faults.

One used bus ticket to Marsa Matruh, Cleopatra’s choice for a resort town on the Mediterranean coast.

One unlucky raffle ticket from the Terry Fox Run at AUC, a fundraiser for 57357 Children’s Cancer Hospital Egypt.

One well-worn “I Voted Today” sticker, a small American flag, and a booklet explaining the U.S. Electoral process, in Arabic.

The receipt from when I walked into a pharmacy here (no insurance, no appointment, no prescription) and paid $8 for medication I would have paid over $200 for in the States without insurance.

Four programs from the Cairo Opera House (Aida, LaCorsaire, Nutcracker, and Egyptian Modern Dance Theatre). Like the National Theater, these are performances supported by the Ministry of Culture. (Side Note: The classics such as Shakespeare are performed here in Arabic, and the translators must keep the iambic pentameter. Wowsers, that is difficult.)

One rock. A souvenir my boyfriend picked up in Fayoum, the oldest city in Egypt, and a handmade mug from Tunis, a pottery village there.

The receipt from when my friends and I went salsa dancing at Bian Cafe.

OK, maybe life is more wondrous than I was giving it credit for earlier today. 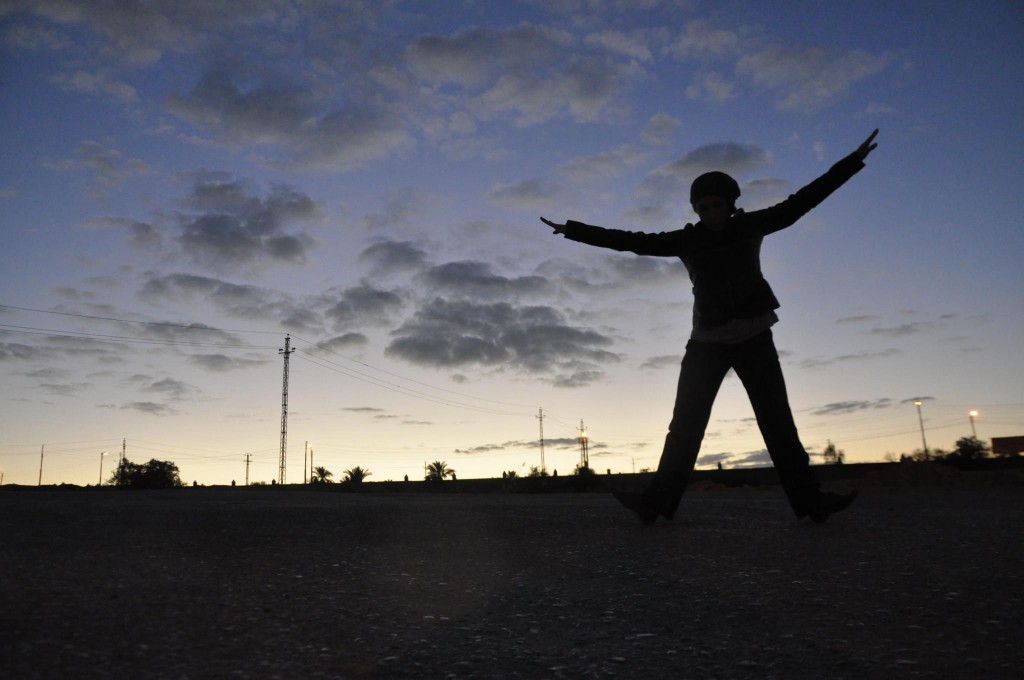 Here I am in the Middle East.

The Middle East is a strange term. Is it meant that this is halfway to the Far East? Only when starting from the Americas? When some people say Middle East, they are only referring to Palestine and Israel. Some people include nearly all the predominantly Muslim or Arab countries in the region. Some include those in Southeast Asia.

MENA is now the common term: Middle East and North Africa. Not sure if Egypt is considered both. In any case, here I am. Here I am dancing, lending a hand, learning. And maybe I’ll go out and have a bottle of Stella in the famous bar downtown named Stella. Maybe I’ll have  saHlub (hot coconut milk with almonds and raisins) and one of those traditional sugar cookies covered in sesame seeds. Read some Naquib Mahfouz. And I’ll go see the Christmas tree in Tahrir Square. Today is Christmas for Egyptian Coptic, Greek, Ethiopian, Russian and Orthodox friends.

Tomorrow I will start preparing for trips to Israel, Palestine, back to Cairo for the anniversary of the January 25 Revolution (We will see if this time around brings rebellion, true reform, revolts to the MB; diversity, mergence, or division of culture), then on to visit a safehouse in Kenya, a village energy enterprise in Uganda, my family and friends in the States, and then back to Cairo in the Spring. Hope you will go on this journey with me. Ups and downs.

In the words of a patient at the Children’s Cancer Hospital Egypt, “I am happy with this dream.”

750 Words For My Egyptians Friends