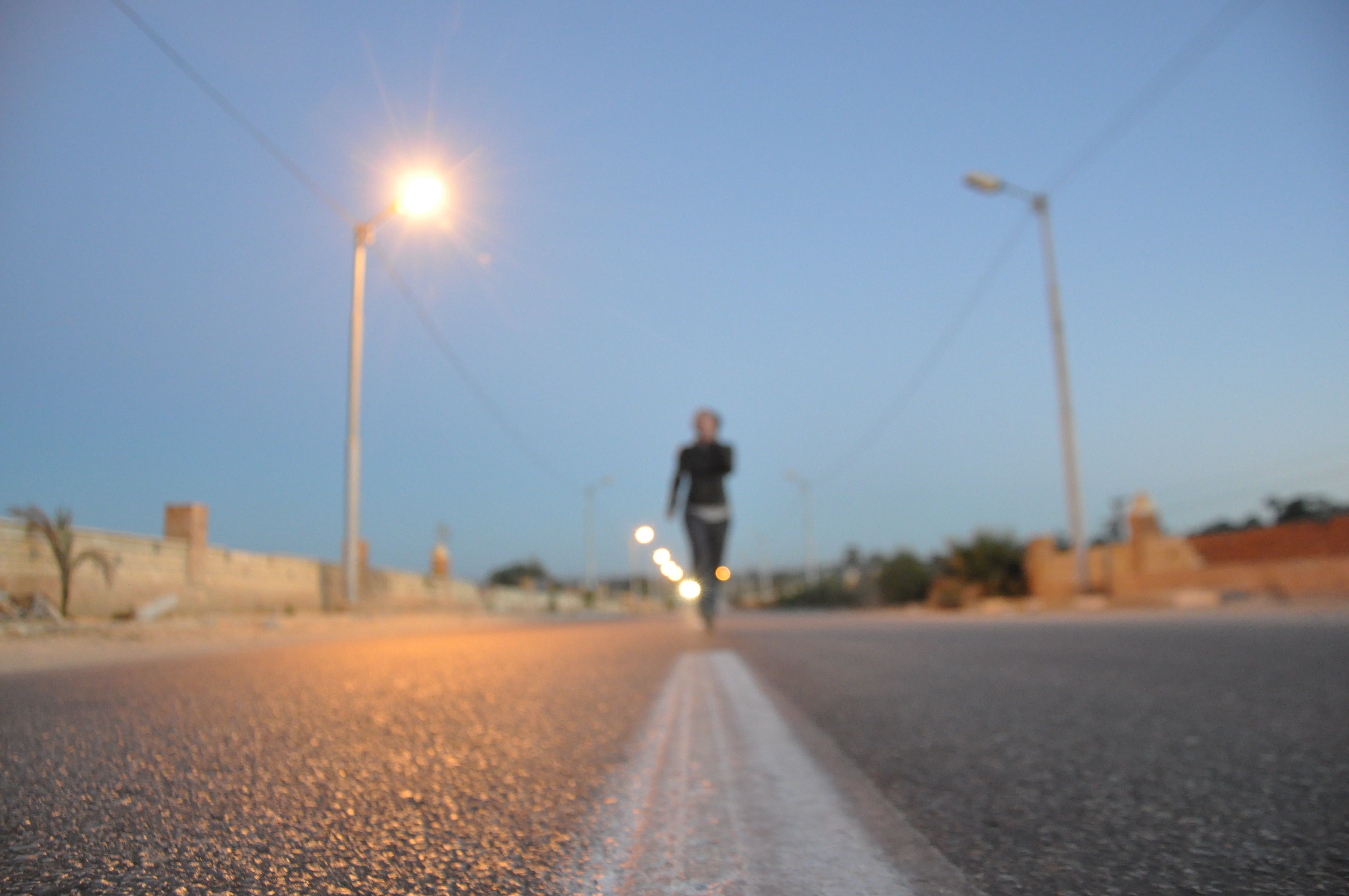 Stray dogs are on every street in Egypt. There are many pet dogs, certainly, but most canines live independent lives. They sleep on abandoned cars. They pick through garbage. They play.

Two of my friends and I were taking a long walk through a small village called Tunis. We were passed by donkeys so smart that when they hear the simple whistle of their owner, they dash through the streets on their own to return to their specific “parking spot” on the farm.

On our walk, we were welcomed by amazing purple and yellow flowers popping over the brick walls, said hello to exotic birds and blue sky, stopped to smell the jasmine and eucalyptus. My friends and I passed lovely children forgoing the sandals their parents had handed them in order to have the freedom of the dirt road under their feet. 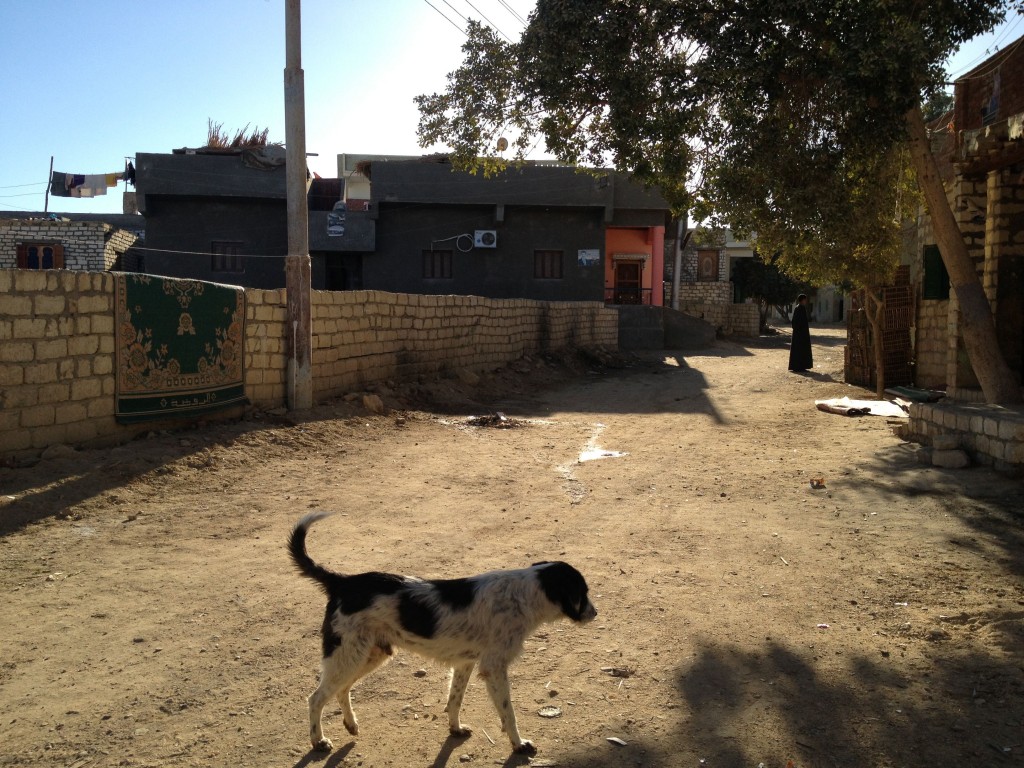 Our buddy in Tunis.

And then a black and white mutt appeared at our side. He walked in front of us, almost like a guide through the winding roads. He walked beside us, stopping to pee just enough to mark some territory.

Easing on down the road with us for awhile.

Then he came to a sudden stop. There was a territory line he couldn’t cross. The eyes of two other strays appeared around the corner ahead. Cold stares. Our buddy remained back, pacing side-to-side. Oh well. We decided it best to wave our goodbyes and thanks, and we wished him well.

Then we went to visit some potters at work and buy their ceramics. 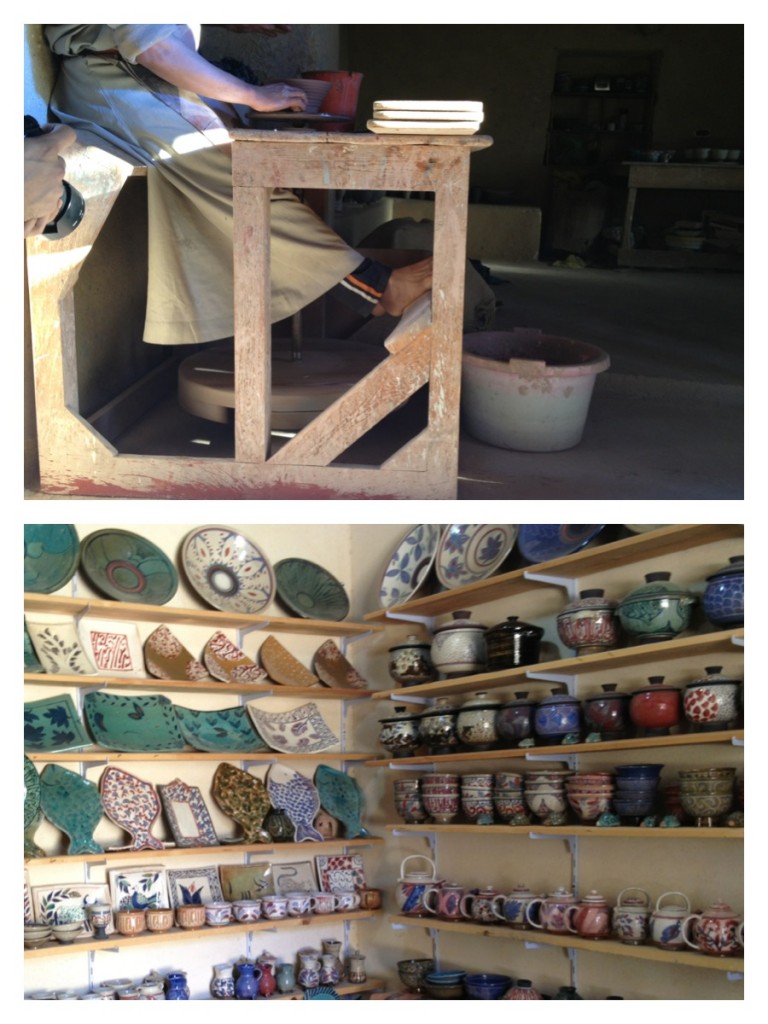 Later that night, we gathered with friends around a bonfire to grill fresh fish, bouri and sea bass. As the fish cooked, two of us decided to go for a little walk under the stars. They were bright and plentiful.

I held my friend’s hand and gave out a content sigh, but the response I got back was a whimper of pain and discomfort. The whimper of a dog in the dark. My friend shown the flashlight in the direction of the whine and we saw a black and white dog. Our buddy from earlier in the day! He had somehow made it all the way here to follow us, be with us. We stood amazed that it was actually him.

And by the way the dog’s coat was mangled on his side, we could tell he had risked himself to be with us. An undefined wound we couldn’t get near enough to evaluate. A brave, wild buddy. Our hearts hurt to leave him, but discussed how this is nature. And he already seemed to be doing better. Healing under the stars.

A night under the stars. That’s what I had wanted for New Year’s Eve. So four of us friends had rented a car and driven to Tunis Village in Faiyum, Egypt.

Faiyum is the oldest city in Egypt, one of the oldest on the continent of Africa. 81 miles southwest of Cairo. Founded around 4000 B.C. in a region called Crocodilopolis. The lake is mighty and calm. The green is bright green. In Faiyum, there is an eclectic little village, built by an artist woman about 20 years ago. The residents of Tunis are farmers, their children, potters and other artists, and tourists filling two small ecolodges. 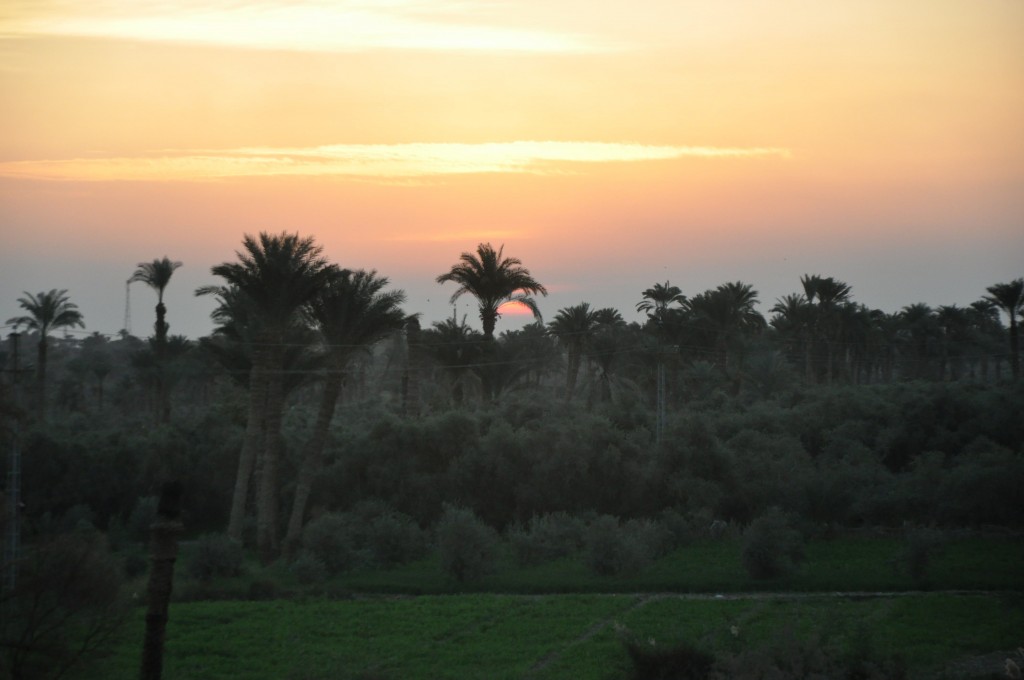 The speed bumps along the way to Faiyum were so steep and sharp you felt like your vehicle may split if you fail to slow in time. We stopped at a roadside tent for tea and Twinkies.

Around 7:30pm, we arrived safely to the home of friends. A beautiful couple in their 60s with a pet puppy named Botatas (potatoes). The wife is a painter, the husband is a potter. Mosaics on the rock walls of their home in the woods. We all gathered around the fire in the backyard, roasting S’mores and grilling chicken. A speaker in the window playing Arabic, Reggaetone and Top 40.

After dinner, we quickly assembled in a circle around the fire. We gave each person a handful of Coffee Mate. One of the ladies looked to her phone and announced that it was already midnight. The time had passed. There was a silent confusion. I looked to my watch and noticed it said there were ten seconds until the new year. So I took the initiative and started to scream “10!… 9!… 8!… 7!… 6!…” Everyone smiled and joined in.

Then someone in the crowd shouted “Khamsa!”

I was embarrassed to realize I should have been counting in Arabic! It hadn’t even occurred to me. Foreigner party faux pas.
The crowd continues in Arabic, “Khamsa!… Arba!… Teleta!… Itneen!… Wahid!!!!!” There were kisses. Long, rocking hugs with things said and unsaid. And with a bottle of champagne, 2013 began around a campfire in Faiyum, Egypt.

Each person threw their handful of Coffee Mate into the fire and a magical poof sparked into the air. This was our version of fireworks.

After staying up to dance, we slept for two hours then awoke at 5:30am in the coldest of mornings to see the first sunrise of 2013. Felt like I was seeing the rise of the year. All of us were dressed with two layers of socks, pants, sweaters, coats and scarfs. Hands tucked inside our sleeves. By the time we finished breakfast (fahtir with honey and cheese, falafel, and tea), the sun was so relentlessly hot, we needed to change into t-shirts and wished we had thought to bring flip-flops and sun screen. And a random camel came to join us. 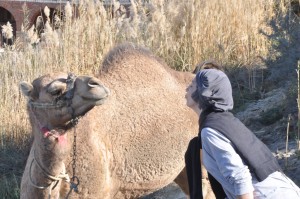 Random camel in Tunis during the first sunrise of 2013.

Cannot think of a better way to start 2013 when my resolution is to trust my heart enough to follow it.

Be brave, my friends. Here we go! 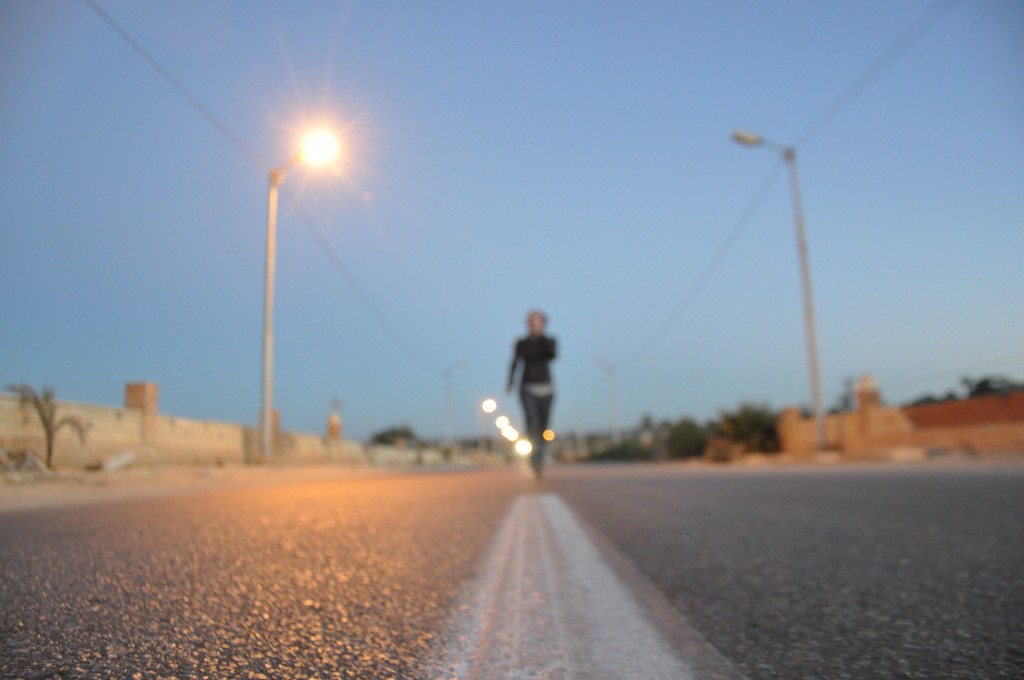 From Bald in the Balkans, to Baladi