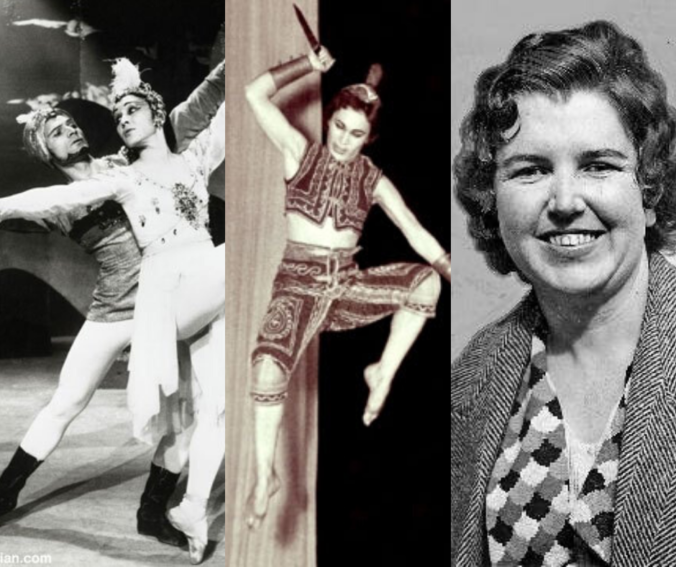 As tensions between Iran and the U.S. build, I started thinking about dance in and between our two countries. I have never been to Iran, but I’ve been to Azerbaijan (which shares a southern border with Iran and a northern border with Russia). And dance was there, strong. I started doing some research and stumbled across a story that has blown my mind and inspired me to rethink how an American can function in the world in 2020 and this new decade.

In 1941, an eccentric 33-year-old American named Nilla Cram Cook started her role as a cultural attaché for the U.S. Embassy in Tehran. This was the year that FDR entered his third term and the U.S. entered WWII. Cook would hold the position in Tehran for the next six years while also serving as Director General of the Arts for Iran’s Ministry of Education. In 1949, she wrote an article for Middle East Journal (Vol. 3, No. 4) titled “The Theater and Ballet Arts of Iran” in which she stated,

“The Iranians are a people so talented in the arts and so uninhibited in self expression that there is every reason for the theater to be one of their greatest creations, no less splendid than their decorative arts. They are prodigiously rich in the life and imagination which form its background.”

More on that in a bit.

Prior to her arrival in Iran, Cook had lived an unimaginable life. She had come from an arts family in Iowa; her father was in theater and was said to have launched Eugene O’Neil’s career. Nilla spoke many languages including Arabic, Farsi/Persian and Urdu. In December 1933, Time Magazine ran an article titled “Runaway disciple,” which told the story of Nilla being the first American to study closely under Gandhi in his model colony, and her midnight escape from the ashram when things got too intense. The article said she “converted to Hinduism under the name of Nilla Nagini and Devi, The Blue Serpent Lady.” The article also called her “plump and pleasing” and included this passage:

“Last week toothless little Saint Gandhi writhed in embarrassment at news from New Delhi. A brand new automobile, ordered on approval, had gone roaring down the road 70 m.p.h., hit a bump, overturned. Out rolled Serpent Goddess Nilla, bruised, battered, but bitterly determined to lead her own life. ‘I don’t care what others say,’ cried she. ‘My heart is leaping for thrills. I want speed. I want to fly. I want to attend orchestra dances.'”

Some call Cook strange, irrepressible, bold, unconventional, enthusiastic, brash and a maverick genius; the Des Moines Register described her as a “smart, mystical woman” and pointed out that “Gandhi baptized her in the Ganges River on her 22nd birthday” and then “the Indian government placed her in a padded cell in a hospital for mental patients in Calcutta before making arrangements to deport her.” At age 25, Cook started translating the Qur’an into English; that project took her a dozen years to complete. In that time, she also served as a combat journalist in Armenia. Later she converted to Islam.

She also disappeared a lot.

“On Jan. 31, 1982, The Des Moines Register briefly recapped her life and said: “Little else is known. … Are you out there somewhere, Nilla Cram Cook? Are you still alive?” She didn’t respond. On Oct. 13, 1982, The New York Times reported that Cook had died at a hospital in Austria, after a brief illness. Cook is buried next to her father near the Temple of Apollo in Greece.”

Now let’s go back to Nilla Cram Cook in Tehran in the 1940s, working for both the American and Iranian governments after spending a year in Afghanistan for cultural research. Writer S. N. Prandita says Cook “directed the foreign services of Radio Tehran and would broadcast her own translations of Persian, Arabic and Turkish poems.”

In addition, Cook dreamed of creating a ballet company that would highlight Persian legends, poetry, music, and dance. She founded what seems to be Iran’s first ballet company, then took them on an international tour of cultural diplomacy to Greece, Turkey, Egypt, Italy, Iraq, Lebanon, and Iranian Azerbaijan. Like a badass, the troupe also toured India (nodding to Cook’s past). She eventually left her positions with both governments and is now attributed to training and inspiring many Iranian dancers. Sandra Mackey describes her work as “remarkable cross-cultural experimentation and dazzling entrepreneurship.”

“But in trying to establish a dance company, Mrs. Cook ran into major obstacles, the principal one being the bias against dancing, especially by ‘good girls,’ for although there are no Qur’anic prohibitions on either dancing or music, there has been a long history of fatwas (religious opinions of senior clergy) and government decrees against both. Never before had a young girl from a good family danced in public. I was only dimly aware of the waves I was making, of the centuries of tradition and entrenched beliefs I was violating. For me, it was a simple matter: dancing filled me with joy. For Tehran society, however, it was scandalous. Good girls did not perform in public, baring their legs for all to see, putting themselves in the limelight.”

Just a few years prior, Iran was being dragged by its hair into the modern era by the shah.

“One of Reza Shah’s most revolutionary modernization efforts was to ban the veil in 1936. His order unleashed a firestorm of anger, resentment and resistance. I was barely four years old when the decree was issued, and I witnessed how brutally it was enforced. I clung to my mother’s hand as we stood riveted to the sidewalk, alarmed at the sight of a woman frantically running down the street, her chador billowing out behind her, a policeman in full chase. Quickly overtaking the woman, the officer grabbed the end of her black covering and yanked it off her head, leaving her with a look of stunned horror on her face.”

In this environment of contradiction, Cook took it upon herself to collaborate with a group of Iranian artists to do something unprecedented. Here are some of her strategies:

“It was whispered that she was a spy: What none of us knew was that Mrs. Cook was part of a grand design Franklin D. Roosevelt had dreamed up to help shape the postwar world. With the war over, Iran was to be an ‘experiment station’ for his policies, which aimed at stabilizing and developing underdeveloped areas. The idea was that the United States would pursue an ‘unselfish’ policy that would help Iran develop a pattern of self-government and free enterprise that would raise its standard of living and help it resist the machinations of Britain and Russia. What neither of us realized at the time was that in participating in this bold arts project, we were unwittingly being used as instruments of both U.S. and Iranian government policies.”

The troupe stayed active until 1953, the year that the CIA carried out a successful coup against Mohamed Mosadeq (the popular prime minister who demanded the nationalization of Iran’s oil resources, which were under the control of the British) and returned the shah to his throne. As Nilla Cram Cook disappeared once again, one of the troupe’s lead dancers, Haideh Ahmadzadeh, establish the Iranian National Ballet which flourished until the 1979 revolution and dance became illegal under Sharia law. The company is now Les Ballets Persans, based in Sweden. Iranian dance artists have been inspiring for centuries, and remain so. But through the story of Nilla Cram Cook, I can start to reimagine how an American artist can be of service to the world, on the brink of new war or not.

History of Ballet in Iran (with great pictures)