How Can the Debate Still Be Out On Kids Wearing Ethnicities As Costumes?

It was near Purim, so I recently allowed my younger dance students to dress-up for class; they were allowed to bypass the usual ballet uniform and wear anything they like. For fun. My first class of the day was students ages 3-5, all girls. They came dressed as Elsa, Jasmine, Cinderella, queens, lady bugs, rainbows, etc. Two wonderful sisters from a wonderful family walked in with brown tutus, headdresses and face paint; the girls stood up in front of the class and told me and their peers that they were “Indians.”

My colleague turned to me later and whispered, “Please tell me they were dressed as turkeys.”

Instead, I later went to an online group of dance educators for some advice. I asked how have they handled similar situations of cultural inappropriateness and appropriation. I was shocked and overwhelmed by the vast majority of the group strongly saying I was wrong and that it’s important for children to explore cultures and to express their appreciation.

My thoughts flashed back to when I grew up in dance during the 1980s and 90s. My friends had a number called Cherokee Maiden that included a sequined, fringe dress with headdress, and shuffles accompanied by the cartoonish hand-over-mouth war cry gesture. All dancers were white and — although we all lived in small towns with Native American names such as Chesaning and Saginaw — if any of us had Native American heritage whatsoever, it went undiscussed. I remembered feeling grateful that I was never asked to dance such a grossly inappropriate routine. Yet when I was a junior in high school, we did a dance called Africa where I had the lead role. We wore animal print unitards and I had an Afro wig while lip synching to Guns n’ Roses’ “Welcome to the Jungle.” I won’t even describe the choreography. We dancers were all white and I never stopped to question this once. So yeah, awareness is important.

The good news is that society has progressed. We have come a long way from the encyclopedic presentations of Ruth St. Denis in the early 20th Century. And four years ago John Oliver asked “How Is This Still a Thing?” about dressing up as other races. The Halloween and dance costume companies are slowly evolving. 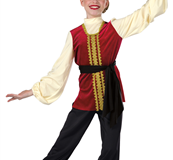 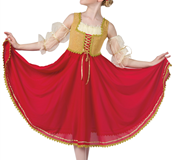 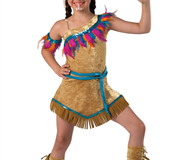 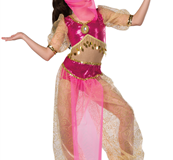 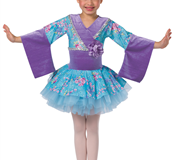 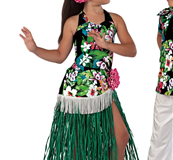 Costumes currently sold by Dansco, similar to many other costume companies.

Nonetheless, there are plenty of examples where cultural appropriation is still widely accepted and embraced. The most obvious example for me is the Shriners (which I wrote about previously), an Arab-themed Western fraternity with few to no Arab members, and with no real intention or interest in learning the actual cultural or religious practices of any Arab peoples. They proudly wear the fez with a crescent emblem, often accompanied by bellydancers in parades. Shriners are generally older, white gentlemen who say “As-salāmu ʿalaykum” to one another as if it their own sort of secret password. The fraternity was founded as the Ancient Arabic Order of the Nobles of the Mystic Shrine (A.A.O.N.M.S.) in 1870.

Also in the year 1870, the opera Aida premiered. La Bayadère came out just a few years later. The ethnic/racial depictions written into many of the characters, costumes, and choreography are highly questionable. While I was living and teaching in Egypt in 2014, I worked to convince the Cairo Opera to stop wearing Blackface and doing cartoonishly stereotyped movements during their productions of these ballets, but I was forcibly dismissed. The director gave me a mighty amount of pushback founded, his stance mostly in traditional practices of the performing arts.

Coming back to the US, I encountered similar concerns. Nutcracker, with its problematic second act in the Land of Sweets and Stereotypes, was written in 1892 and has been embraced as the right of passage for any budding ballet dancer, of any race. Nearly every young dancer portrays an Arab, Asian, Russian, or Spanish person during their training.

Nutcracker is a keystone. Just a year following the first Nutcracker was the World’s Columbian Exposition (world’s fair) held in Chicago. This event brought Orientalism and “culture on display” to new peaks. The World Fair/Universal Exposition continues to this day — every five years — but nowadays the focus is much more on trade and cultural exchange, learning about one another. I was honored to attend the 2015 Expo in Milan, Italy as a guest of the United Nations Alliance of Civilizations and found it fascinating. In 2020 the World Fair will be in Dubai, United Arab Emirates.

If the World’s Fair can evolve, can dance and musical theater education as well? Can our predominantly white school perform West Side Story or Aladdin? What about Fiddler? What about learning and performing a Hoop dance from one of our peers when only one student is from that tribe? What about offstage; does a non-Indian wear a Sari to an Indian wedding? So many questions arise.

For me, after much debate and discussion, I’ve come up with five elements that must be at play if you are going to have children exploring cultures through arts education in these days and times.

What are your thoughts? Should we even still be talking about this?

Good, The "Other" Category

My 2018 Resources for Social Practice Artists