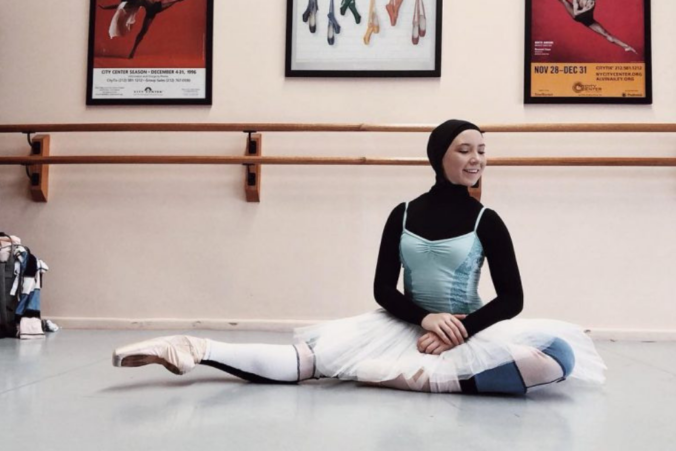 8 Things to Do About the Islamophobia in the Dance World

On September 6, 2019, Pointe magazine published a feature article about Stephanie Kurlow, who is an Australian teenager pursuing a professional ballet career. She happens to also wear a hijab, and claims she would be the first hijabi dancer in the professional ballet world.

My only surprise in Courtney Henry’s article was that it was written so recently. Because I have known of Ms. Kurlow for years, before clicking through to the article, I started with the comments on Pointe magazine’s Facebook post.

“Surely this oppressive head gear has no place in the arts!”

“If she auditions for the ABT, they’ll make her principal just to show how magnificently diverse ABT is. Kinda like the principal who was elevated due to skin color rather than skill.”

“Sure, why not? After the ‘gender-fluid ballerina’ the ballet world couldn’t possibly get more ridiculous anyway.”

The comments got worse, but I have decided to refuse to spread such vitriol. The language was disheartening, especially after the dance world came to such strong and swift defense of boys and men in ballet after the Good Morning America controversy. We thought the bullies were external, but the dance world may have to admit that the bullying is also coming from inside the house.

We say in the field that everyone should dance, and that should and does include those from religious communities and families. Brigham Young University (99% Mormon student body) has a stellar dance department that I was honored to visit last year, and Mormon/LDS dancers dominate in competitive ballroom dance. In addition, Christian praise dance is highly popular in the US and conservative dancewear for liturgical dancers is available in almost all costume catalogues without question.

Being not the only dancer from a religiously or culturally conservative community, nor the only hijabi ballerina, Ms. Kurlow should neither be considered an anomaly nor a token. Hijabi dancers rock our world in beautiful ways. My friend Amirah Sackett, stellar Chicago-based hip hop dance artist and educator who has performed internationally and in music videos, started the We’re Muslim, Don’t Panic dance project and often collaborates with other hijabi dancers. Here is Amirah out and about improvising in Europe last week.

Kurlow and Sackett are among a wide world of active hijabi women. There are hijabi pole dancers in Malaysia. There are hijabi women who are boxing like Safiyyah Syeed, ice skating like Zahra Lari, running like Rahaf Khatib, DJing like Dj Safir, rock and rolling like this Indonesian rock band, sabre fencing like Ibtihaj Muhammad, and swimsuit modeling like Halima Aden. There is the Hijabi Ballers organization in Toronto. And we can check out the #hijabdancecover craze on YouTube and see a production of The Hijabi Monologues. Then on February 1, we can all celebrate World Hijab Day.

In 2012-2015, I taught ballet, modern and jazz dance at five different venues in Cairo, Egypt. Most of the girls and ladies were unveiled at that time, but now some dance schools in Egypt and elsewhere also offer classes especially for hijabi girls and women. When the Muslim Brotherhood-led government tried to ban ballet in Egypt in 2012-2013, the Egyptian people rallied around their arts and culture, including dance, and I had the honor of joining them in those demonstrations. The following year, So You Think You Can Dance Arabia was a popular show in the region and a contemporary dance group from Syria won Arab’s Got Talent.

Wearing a hijab is a personal and spiritual choice. In the dance world, Muslim dancers who are unveiled — such as Hala Shah, Khadija Anderson, along with countless Muslim men — have been expressing themselves through dance for centuries. Dance in Azerbaijan (a country that is statistically 100% Muslim and sits between Iran and Russia), has a long lineage of phenomenal ballet skill by unveiled and devout Muslim women and men, as I witnessed when I visited in 2013.

Dance in Islam may be split on the official decision of whether dance is forbidden/haram in contemporary society, but there is no denying dance’s role in Muslim cultures with and without the head coverings. According to a 2012 article by Omar Sacirbey in Religion News Service,

“Dance has long been integral to many Muslim societies, including the Filipino Muslim dances of Singkil and Pangalay; belly dancing in the Middle East; and the long dance parties that precede Muslim weddings in South Asia.”

Both observant and less observant Muslims have been dancing for exercise, expression, social and cultural activity, spiritual reasons, and public performance (some for co-ed audiences and some for gender-split audiences). In conservative Muslim culture, like conservative Jewish culture, men and women dance. But they mostly do so separately. In northwest Chicago, I teach at all-girls high school and help with their all-girls musicals. The audiences and crew are all female as well, and the women cover their hair with wigs rather than scarves. The women of the community are currently in rehearsals for their all-female production of Les Miserables.

As I read the comments on the Pointe magazine’s post, I felt more and more disappointed in the fact that this type of talk was in the dance world at all. They spoke as if there is no place for Muslims in dance. According to the Pew Research Center, there are approximately 3.45 million Muslims in the US; Muslims of all races and ethnicities are definitely in the dance world. If the responders on Pointe magazine’s post are dance educators, I can only hope they don’t treat their Muslim students and colleagues with such ignorance and judgement. For those colleagues in dance wanting to make positive changes to make their studios more welcoming, here are a few suggestions.

To all dancers coming to the arts from a place of faith, please keep dancing. We welcome you. We appreciate you. We will learn from you. We will follow your lead.

Why the Dance World Just Can’t Drop That GMA Thing