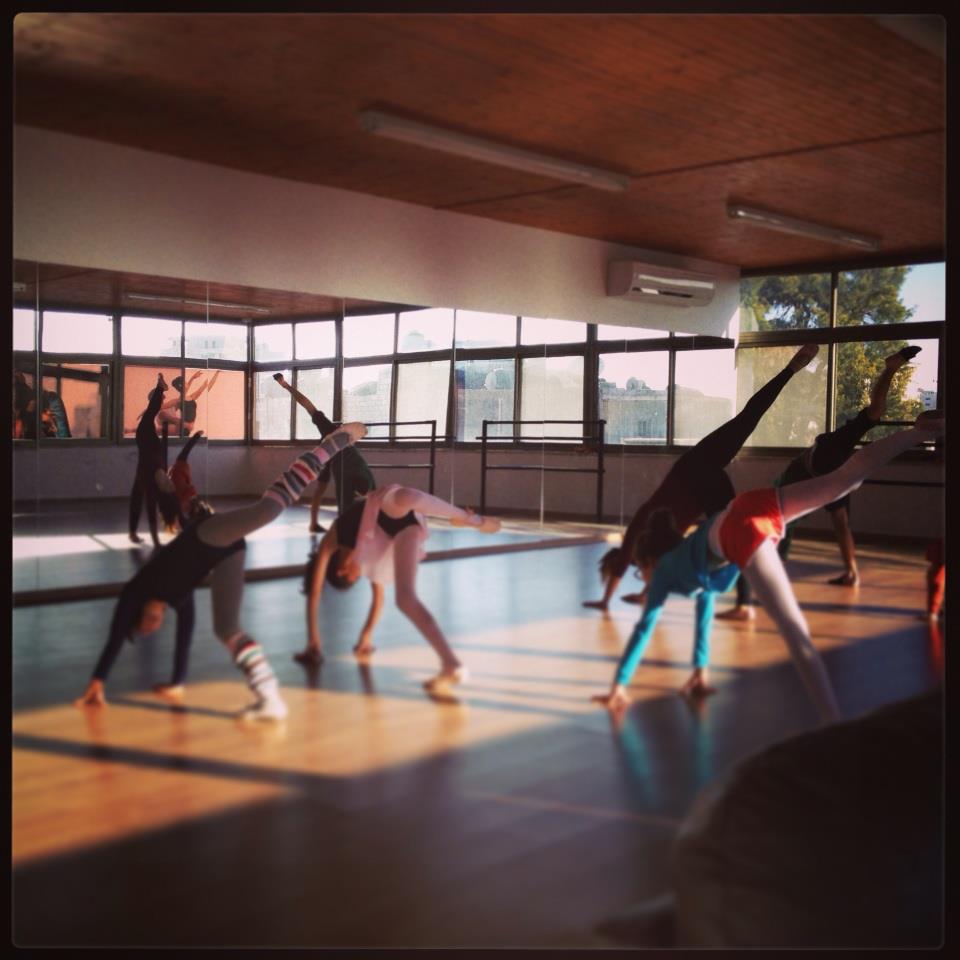 Almost a year ago, I flipped on CNN and caught a short feature about a dance educator in Palestine. She is an entrepreneur who founded the Ramallah Ballet Center. I immediately sought her out on Facebook and sent her a friend request. She could not have been more open and we became fast friends. When my Fulbright ended a few weeks ago, I knew I had to go to meet her and her students.

First day of the new term at Ramallah Ballet School and Dance Center.

And on the way, I met old friends and new in both Palestine and Israel. And I learned that dance and more dance is vibrant on both sides of the wall. On all sides of the politics.

In the heart of the old part of Tel Aviv is a complex of buildings dedicated to dance. The illuminated old square holds performance space, rehearsal space, workshops and administration for two main companies, Inbal Pinto and Batsheva. Both companies are world-reknowned, and favorites of mine. The theatre there also brings in international performances constantly. I didn’t stay in Israel for long because I was already familiar with traditional Israeli dances from my time in Chicago and was aware of the work of the main companies. But I had little knowledge of what was happening in Palestine.

On the mountains of Bethlehem are four enormous modern buildings, being built by the Russians. They will hold arts classes and other services, but unlike other constituencies helping boost Palestinian programming, they will be competing with Palestinian civil society organizations. This is a growing concern and controversy.

On those same mountains of Bethlehem are buildings for the Palestinian civil society organization, Diyar Consortium. One of their divisions offers free dance and football (soccer) lessons and clubs. Soon they will also offer art and music classes. The Diyar Dance Theatre  is their flagship program. There is a semi-professional adult group, all volunteers, along with a junior troupe. This is a diverse group of Christian and Muslim Palestinians from different economic backgrounds. Some dancers come from a nearby refugee camp. I saw them perform in a church in Chicago. Amazing. Mixing traditional Palestinian dance (dabkeh) and powerful dance theatre.

Their words describe the work much better than I ever could…

“The Diyar Dance Theater believes ardently in the value of preserving the culture of the Palestinian people. Passing along culture through the visual and performance arts, food, and literature has been a primary means by which Palestinians have held on to their identity, values, norms, and traditions, not only in the occupied territories but also in the Diaspora. Protecting this culture is essential in the struggle for independence, for it is a source of hope, a fuel propelling the Palestinians from the past into a more promising future. It reminds them they are more than their present circumstances: there is vibrancy in who they are as a people.

For Palestinian youth in particular, dance and theatre are important vehicles not only for cultivating cultural identity but also for creating and sustaining mental and emotional health. As tools of expression, dance and theater become outlets for those wishing to release the stress accumulated from years of living behind concrete walls. Working out issues through art builds self-awareness, and dancing away the week’s worries aids with self-esteem. At Diyar Dance Theater, youth can create movements for justice and gender equality that are more powerful than rocks and angry words.

But perhaps most importantly, coming together to produce a performance piece teaches youth how to mobilize themselves around a shared vision… At Diyar Dance Theater, youth are catalyzing change in themselves and in their community….What happens on stage tethers the two in a way discourse and debate often cannot.”

During my visit, I had the honor of teaching workshops and classes both at Diyar Dance Theatre and the Ramallah Ballet Center. 10 children in one begining ballet class, 25 teens in a swing and musical theatre class, and 10 adults and young adults in an “Intro to Jazz Dance” workshop. All joy. 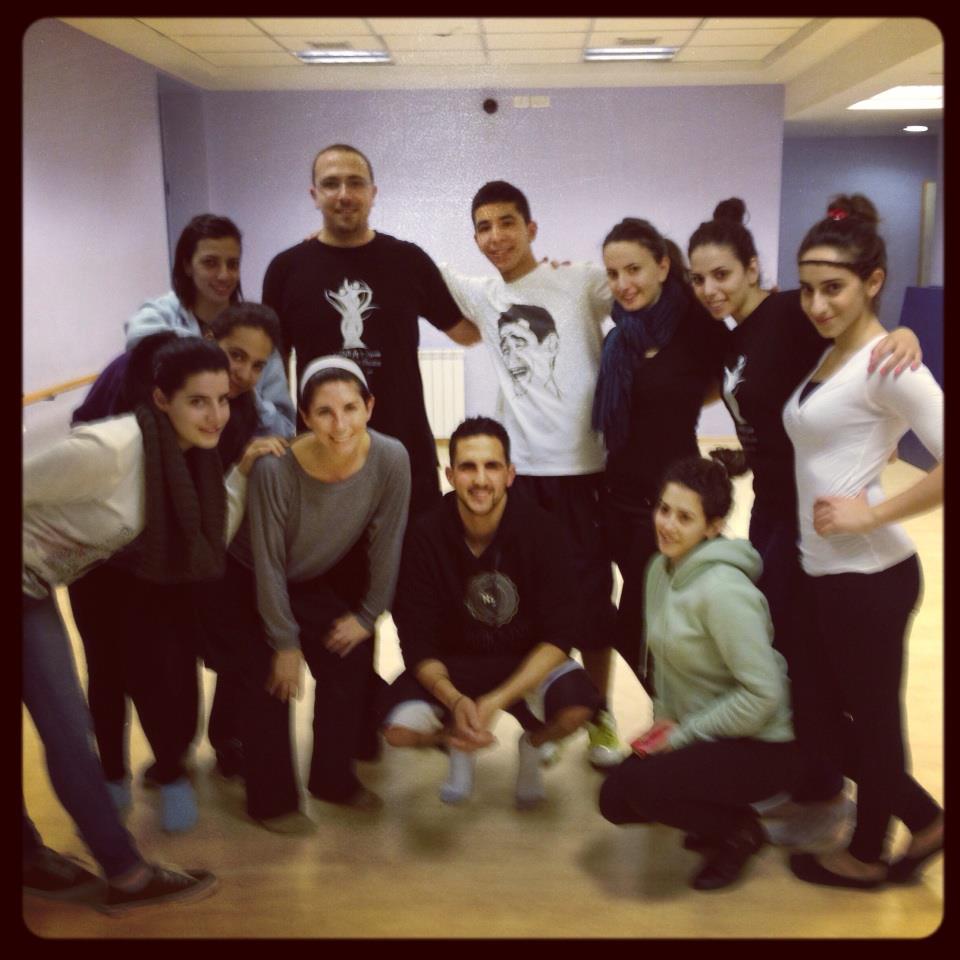 With Diyar Dance Theatre in Bethlehem

The day after, I received the following message from one of the teen dancers:

hello  i ‘m from Dyiar dance theater …. i wanted to thank you for the amazing dance lesson ! AWESOME !hah
very nice meeting you
lots of love ,
Lara

In the city of Ramallah, there is an organization called Sareyyet Ramallah (First Ramallah Group). Every April since 2006 they have produced the Ramallah Contemporary Dance Festival with the help of the regional Masahat Contemporary Dance Network which includes not only Sareyyet (Palestine), but Maqamat Dance Theater (Lebanon), The National Center for Culture & Performing Art (Jordan), and Tanween Dance Theatre (Syria). According to its mission, “the Festival aims at promoting dialogue and cultural exchange between the Palestinian people and the peoples of the world. It also aims to introduce a variety of contemporary dances to the Palestinian people and to develop the capabilities of those who work in the dance field in Palestine. The Festival targets the Palestinian public in general and the youth sector in particular.” During the Festival, there are performances, workshops, a Dance & Society conference and an International Dance Day celebration. This is much more progressive and put together than anything I’ve seen in Egypt.

In my last blog post, I wrote about genocides. I believe the arts have are a mighty tool in both preventing and reconciling genocide. Recently came across this project and found it intriguing. http://www.artstoendgenocide.org/stomp-out-genocide.html Maybe I should reach out to them.