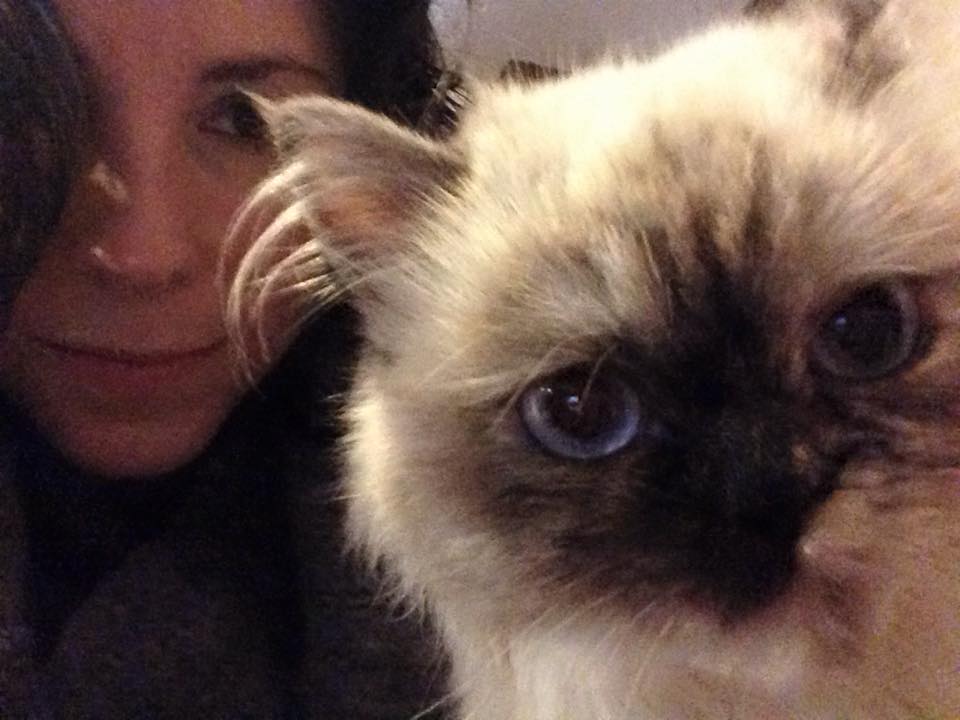 Best Kitty Ever: A Tale of CH, Western/Middle Eastern Identity, and Determination

My husband spotted him under the tire of an abandoned car. He was stick-thin tiny, big eyes, distraught, tremoring and covered in street filth and his own feces. I thought he was a Middle Eastern rodent. We bent down, got closer and saw he was a wide-eyed kitty. Completely malnourished. At death’s door after only 1-2 weeks in this mighty world. Barely visible in the shadow of a car tire.

It was in the hot July heat of Cairo, Egypt during Ramadan. All the stores were closing for Iftar. There’s no way we could have left him there. We called a vet and begged him to stay open until we could get there so that he could put an end to this kitty’s misery. So we gently, gently slid him onto a piece of cardboard, using a rolled-up newspaper, and got into a cab. He lay still during the ride except for a pronounced tremor. His legs were unbending. I didn’t want him to die without a name, so we named him Lamar after the juice brand advertised on the billboard outside the taxi window.

At the vet, they gave him a bath and discovered the kitty was white and a Lamara, not a Lamar. An x-ray determined that nothing was wrong with her structurally. The vet said she probably had nerve damage from a strong kick or long fall. She didn’t appear to be a breed of street cat, so a human with no heart had probably threw her out. The vet said that with good care  and a few prescriptions, she would be walking in 2-4 weeks. We agreed to take her home and get her to the point of walking so that she could find an owner or shelter. After 4 weeks, she was healthier but no success on the walking front. She still had to be held to drink and eat (which she does ferociously), and lied down to go potty (which can get extraordinarily messy for a long-haired kitty). 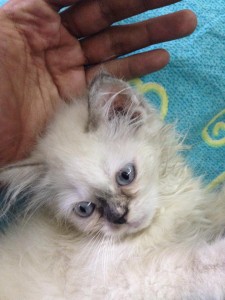 A friend kitty-sat for us and took her to the international vet who gave the official diagnosis. Turns out Lamara was born with Cerebellar Hypoplasia (CH), which is similar to ataxic cerebral palsy in humans and looks like Parkinsons. Cats with CH have a normal life expectancy and are usually not in any pain, other than from falls. Many wear helmets. We considered it, but she hates things on her. Kitty diapers and “wheelchairs” were also a no-go. 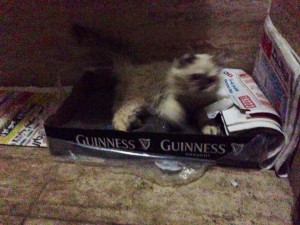 My husband spoke to her in Arabic, and I learned the basics of the language. Her breed seems to be Siamese / Persian / Himalayan mix, but she is an Egyptian gal to the core. She may or may not be Arab, but she is Middle Eastern. 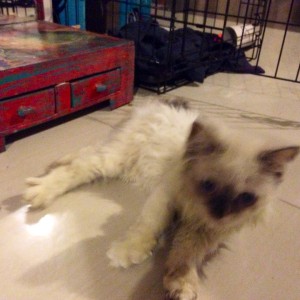 And she is making her life.

She says no to nothing.

With her moderately severe CH case, they said she wouldn’t ever really walk. At four months old, she took her first consecutive steps.

Then she taught herself to drink sitting up. My husband coaching her through every sip.

Then she taught herself to climb, all the way out of her crate. 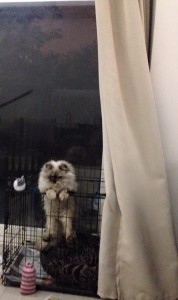 Then, we thought it would all have to come to an end. We became so busy with battering life in Egypt, barely able to take care of all her special needs. She was not taking to any lesson on being house-trained. We tried everything and our flatmates had become fed up. It broke my heart just thinking of alternatives to her not being there. We persevered and looked at life one week at a time. 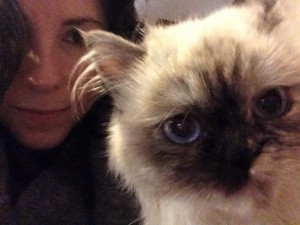 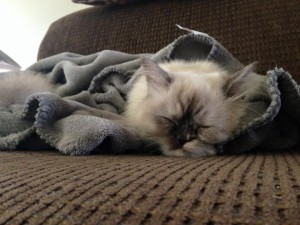 At 11 months old, we caught her in the other room practicing trying to stand on all four legs. Balancing lessons. She had taught herself to sit when she was about to fall, rather than fall to the ground.  In addition, she decided to teach herself how to scratch her ear with her back paw. No luck. But she kept trying and trying for months. We would assist her by guiding her foot or holding her head up for her.

She enjoyed her first birthday in the intense Cairo summer heat of the El Sisi adminstration. 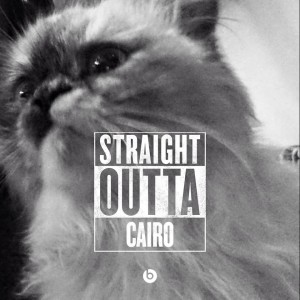 Then she decided she would immigrate to the U.S. This must have been her decision, because I cannot remember my husband and I ever discussing it. This was a given.

She got her vaccinations, passport, paid her fees, and got into a carrier for eighteen+ hours including a layover in Paris.

She came to America and breathed the fresh Michigan air. 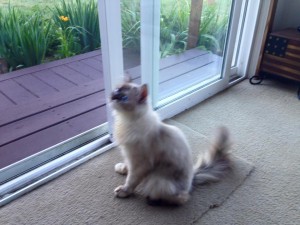 She saw grass for the first time.

She saw birds, frogs, bugs and went on her own version of an uncoordinated backyard stealth attack. Her vertical leap grew to an impressive 2 feet and she “stuck” the landing often with her face. My dad generously constructed her a wheelchair, feeder to help hold her up, and steps to get on the couch. She never decided to use any of these devices the way they were meant to help. But he did teach her to use litter inside a boot tray!

She was making quite a mess of the back room, so we made her a special walled zone in the basement. Well, in the morning, we found her sitting at the top of the stairs. We all thought one of the humans in the house must be a prankster because it was impossible for her to scale a wall and climb an entire flight of stairs.

So she demonstrated once more…

I am one determined kitty. I made it up

Recently, the three of us moved from small town Mid-Michigan to Chicago. Back to the big city life for our gal. But when the temps reached 66, she gave me a demanding look towards the door.  So Lamara took on the public park. 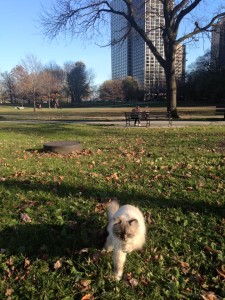 Definitely the only cat people had seen in this setting. No fear, and having a blast “chasing” squirrels and diving in the leaves. I stayed near her, on dog and bike patrol, and she had happy exercise and fresh air for 40 minutes with soft grass to fall on. Getting stronger and more coordinated.

She is not the dog we discussed and were planning for, but Lamara has changed our lives. She does the unexpected, every time. She is borderless, bilingual, and won’t be defined. My love. With every butt wipe and every death-defying leap off the couch, she inspires me. And this is only the first 1.5 years of Lamara’s story. Stay tuned.

Protected: Sift for Hope in the Holy Land

“I Am Who You Have Been Waiting For.”