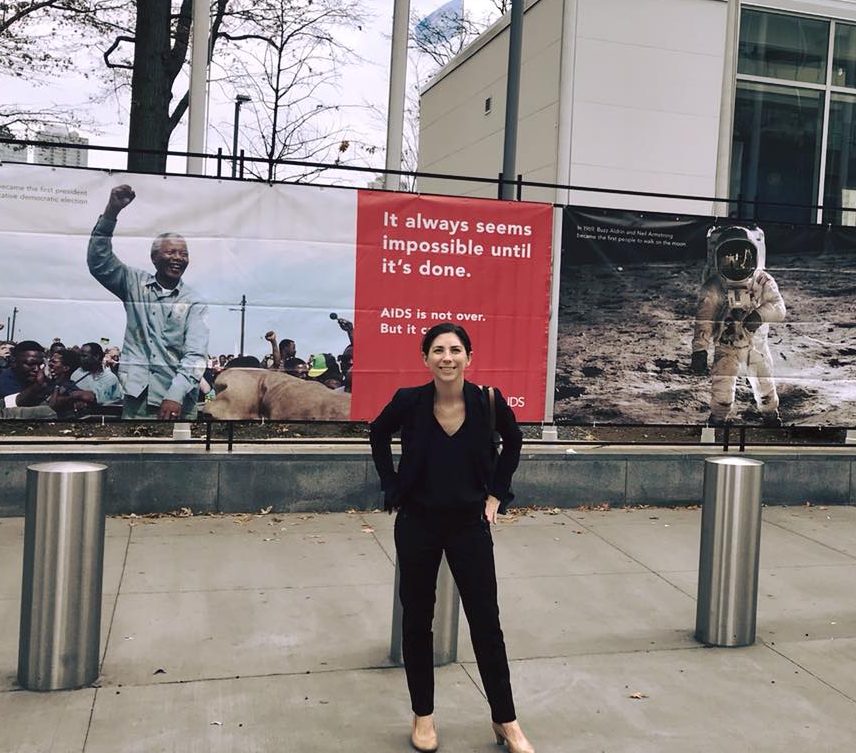 At the United Nations Headquarters, NYC

From December 1-7, 2017, I was honored to join 15 other international delegates in New York City for the United Nations Alliance of Civilizations (UNAOC) summit on “The Role of Media and Civil Society in Fostering Peace.” This summit concluded with presentations hosted by the German Mission to the United Nations, with my subgroup focused on the role of storytelling and the arts. 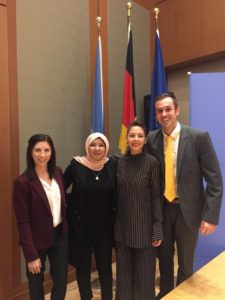 With Aziza Benlamoudi of Algeria, Fatima Al Banawi of Saudi Arabia, and Tomas Horvath of Slovakia (left to right)

Back in 2010 I was honored to have been part of the pilot cohort for the UNAOC Fellowship Program, traveling to Alexandria, Cairo, Casablanca, Doha, Fez and Rabat. The fellowship aims at fostering intercultural exchange and interfaith understanding by engaging with young leaders and professionals from Europe, North-America (EUNA), the Middle East and North-Africa (MENA).

Framed around multi-week exchange trips between EUNA and MENA countries, the program sends participants from each geographic area to their counterparts’ region. Like my peers, that trip was my first time to the MENA region. During the seven years following the fellowship, I returned several times to Cairo and eventually lived there as a U.S. Fulbright Scholar, EducationUSA Coordinator, and dance educator. The UNAOC program was impactful, indeed.

Fellows from a range of UNAOC Fellowship years 2010-2017 gathered for last week’s summit in NYC, and thus, represented different age groups as well as sectors and countries. Participants included:

As the only U.S. delegate, I was proud to represent American values as I understand them. I organized an outing to see “The Band’s Visit” on Broadway and shared the progress of the Dance Peace project in Chicago. For the delegate from Libya, this summit represented what was perhaps his last visit to the United States, as the Supreme Court’s decision on the travel ban went into effect mid-week. For the delegate from Gaza, a good friend I had met during a previous alumni summit in Baku 2013, the President’s announcement on Jerusalem made for an especially painful and busy time. 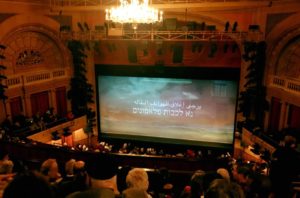 Pre-show for “The Band’s Visit” at Barrymore Theater, NYC

In preparation for this summit, we were to read three UN documents. Surprisingly, these were motivating reads. They detail actions that can be undertaken no matter our sectors or geographies. Below are curated excerpts with the goal of providing my colleagues in the arts the language and resources to approach or expand their work in peace-building abroad and locally. The recommended strategies and circumstances apply as much to combatting domestic terrorism, gun and gang violence, or hate crimes, as they do to combatting international terrorism.

“Expressing concern that among civilians, youth account for many of those adversely affected by armed conflict, including as refugees and internally displaced persons, and that the disruption of youth’s access to education and economic opportunities has a dramatic impact on durable peace and reconciliation.

Youth are the future role models.

Facilitate an inclusive and enabling environment in which youth actors, including youth from different backgrounds, are recognized and provided with adequate support to implement violence prevention activities and support social cohesion.

…promote a culture of peace, tolerance, intercultural and interreligious dialogue that involve youth and discourage their participation in acts of violence, terrorism, xenophobia, and all forms of discrimination.” 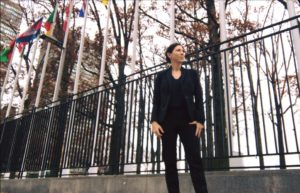 At the United Nations Headquarters, NYC

“Nothing can justify violent extremism but we must also acknowledge that it does not arise in a vacuum. Narratives of grievance, actual or perceived injustice, promised empowerment and sweeping change become attractive where human rights are being violated, good governance is being ignored and aspirations are being crushed.

[Youth with almost] no religious knowledge or education, makes them vulnerable to indoctrination.

Provide medical, psychosocial and legal service support in communities that give shelter to victims of violent extremists, including victims of sexual and gender-based crimes.

We must pay particular attention to youth. The world ’s 1.8 billion young women and men constitute an invaluable partner in our striving to prevent violent extremism.

Harness the idealism, creativity and energy of young people and others who feel disenfranchised.

The rapid advance of modern communications technology also means that today ’s youth form a global community of an unprecedented kind. This interconnectivity is already being exploited by violent extremists; we need to reclaim this space by helping to amplify the voices of young people already promoting the values of mutual respect and peace to their peers.

We have to identify better tools with which to support young people as they take up the causes of peace, pluralism and mutual respect.

Support and enhance young women’s and young men’s participation… by prioritizing meaningful engagement mechanisms, as laid out in the Amman Declaration on Youth, Peace and Security.

Involve hard-to-reach young women and men, such as those from underrepresented groups, in efforts to prevent violent extremism, as laid out in the Guiding Principles on Young People’s Participation in Peacebuilding.

Establish national mentoring programs for young women and men, create space for personal growth in their chosen fields [including the arts], and offer opportunities for community service which can enable them to become leaders and actors for constructive change.

Implement Security Council resolution 1624, promoting a comprehensive approach to incitement and violent extremism, and the Rabat Plan of Action on the prohibition of advocacy of national, racial or religious hatred that constitutes incitement to discrimination, hostility or violence.”

During the UNAOC summit this week, each group was to conclude their presentations with a list of their own recommendations, inspired by the UN materials. Before sharing excerpts from the third and last document, here are the recommendations from our summit subgroup looking specifically at storytelling and the arts, with credit to Aziza Benlamoudi, Fatima Al Banawi, Tomas Horvath and Shawn Lent.

Now back onto the final document…

“Public and private donors should support education efforts aimed at the general public in the West and in predominantly Muslim countries by funding arts performances, film festivals, educational tours, and scholarly/educational conferences that disseminate information on the richness of diverse cultures and on the importance of cultural interactions.

Engage the talents of youth and adults in constructive social action through service learning programs and initiate service learning components connected to degree and certificate programs.

Educational reform efforts have emphasized technical and skills-based education in an effort to stem high unemployment rates. While this is a positive development, in some cases the focus on strictly job-related education has diminished the attention paid to the humanities and social sciences and limited the availability of instruction in these fields. A well-rounded holistic education is invaluable for the development of critical thinking, interpretive, and adaptive skills which are increasingly important in a world of increasing complexity and diversity.

Muslim and Western public and private donors should work together to establish a Cultural Fund and Networking Service to connect young Muslim artists, writers, musicians, filmmakers, etc. with their Western counterparts and leaders In the culture industry. The objective would be to facilitate the dissemination of contemporary Muslim culture to other societies and, in doing so, to promote the cause of dialogue and understanding.

A coalition of key stakeholders should be established to develop a consensus youth employment strategy [including in the arts].

Public and private donor agencies should support girls’ and young women’s associations, networks, and organizations which advance girls’ education, develop platforms for women’s participation in all aspects of society, or implement other projects which enhance women’s status.

Expand support for programs that help situate young immigrants in the broader communities outside of the schools and provide direct experience in social interaction and civic activism with other youth which can reduce feelings of alienation.”

These last recommendations, in particular, underscore the importance of supporting projects like Dance Peace, where we are in need of dance and music scholarship sponsors for spring 2018 and beyond. We know that artists can play a dynamic role in creating and sustaining peace through arts participation, monitoring tensions and progress through movement analysis, and educating a peaceful generation through kinetic empathy and collaboration. We know the arts can have a great impact in this increasingly cross-cultural and transdisciplinary world, and that being so, has a great responsibility.

How Can the Debate Still Be Out On Kids Wearing Ethnicities As Costumes?