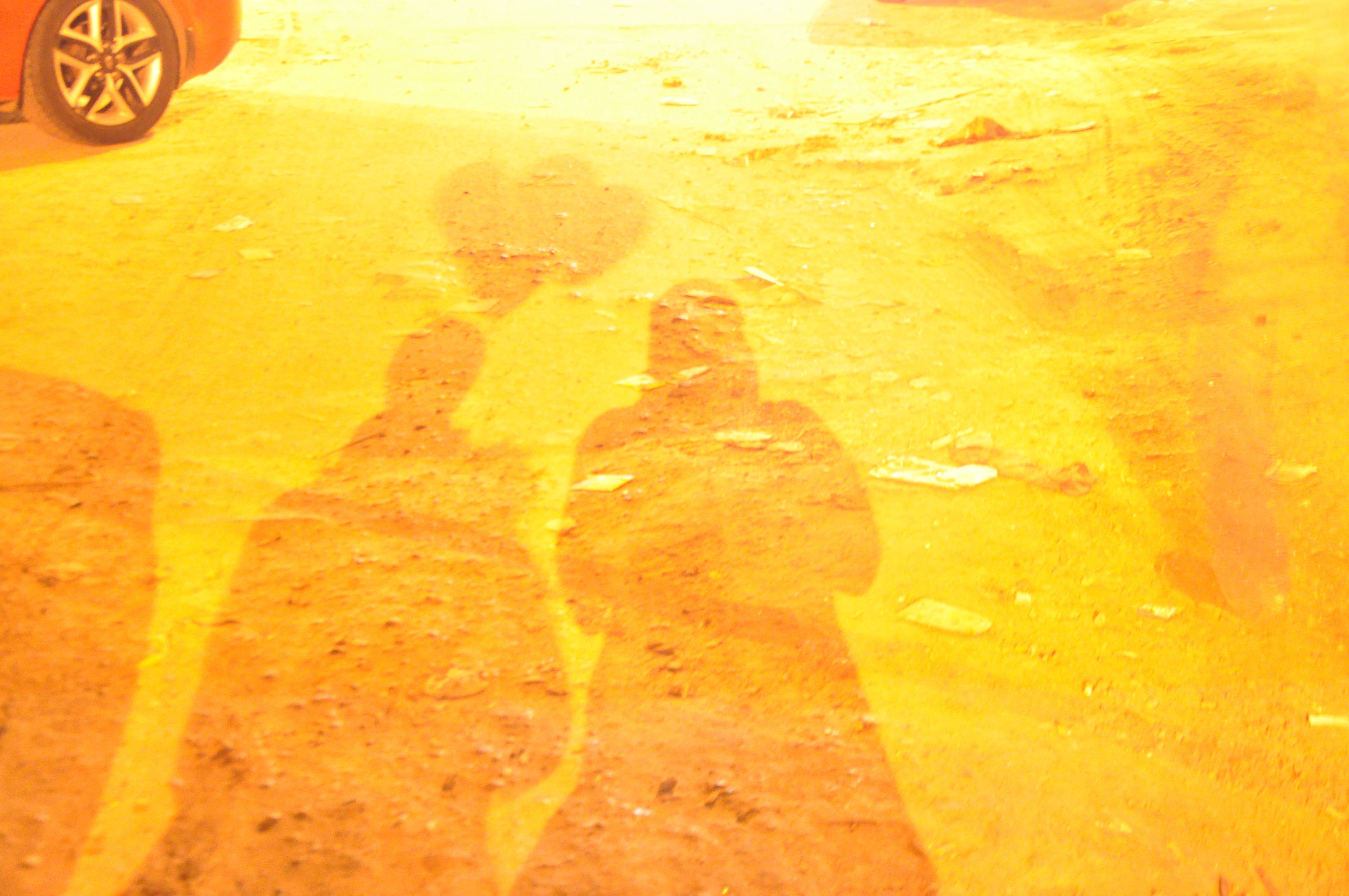 “Hello, I’m calling about the studio apartment in Zamalek. Is it still available?”

“Are you single? Where are you from?”

[in a very rude tone] “There are absolutely no male guests in this apartment. Do you have a problem with that?”

Apartment hunting in Cairo is rough, especially for dating heterosexual couples. Few places allow co-habitation. And the bawabs (door guys) monitor who comes and goes. They are notorious for invading privacy and being in tenants’ business. During vacations, it is also the law in Egypt that unmarried guys/gals have to pay for separate hotel rooms, even if the room has doors and walls separating beds. So frustrating.

My boyfriend and I are both in our 30s, responsible and loving folks, bad liars. But looks like we may have to fake being married sometimes to get anything in this town. It’s common practice, not a big deal, but I don’t like it.

Oh well. I guess a fake marriage isn’t the worst thing in the world. A season of love is upon us. And he makes me incredibly happy. Making plans for Valentine’s Day next month, continents apart. Putting a little love in the middle of a harsh winter. 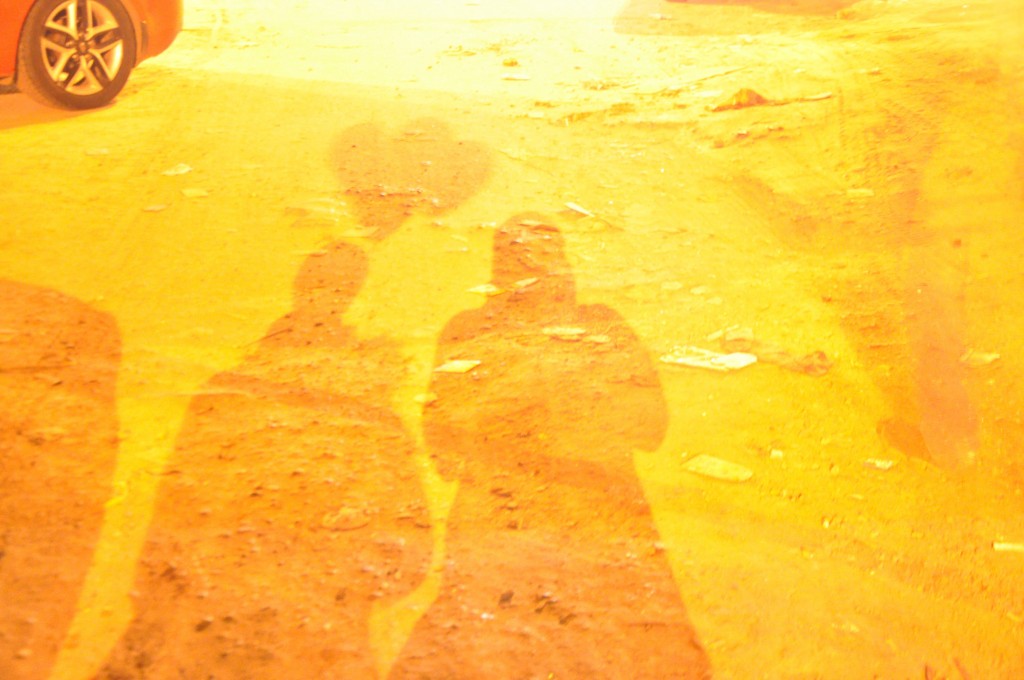 He and I. With some balloons.

This February will be my parents’ 40th Anniversary, celebrated in the midst of my mom’s cancer treatment. 40 years of supporting each other through the birth of a child with Craniosynostosis, financial stresses, in sickness and in health, a roaming daughter, the deaths of their own fathers and my mother’s mother… But loving each other and laughing the whole time.

I couldn’t be more proud of them.

Marriage in my life is a concept I haven’t wrapped my head around just yet. Before this, my longest relationship was in high school. I did buy a wedding dress last year cause it was on clearance and I was convinced I could have it dyed and then wear it for galas.

I returned it. Couldn’t hang a wedding dress in my closet after all. Too weird.

In the States, single gals like me learn that they shouldn’t bring up the subject of marriage too early in a relationship. Jinx yourself; or scare the man. Either way, not good. But here Egyptian guys talk about marriage easily, casually.

For most Muslim Egyptian marriages, first the two families meet and make sure they get along. It is truly a marriage of families. Sometimes even first-cousins marry each other. No problem. Then there is a religious ceremony followed by an engagement party where the rings are given and many pictures taken; then there is a lively parade (sometimes with dancing horses) where the new furniture and appliances are taken to the house to set up their new life together; then there is the wedding where nearly the whole town is invited. The bride’s dress is elegant, covering the arms and head.

During the evening, there is a parade of cars and motorcycles, honking a particular rhythm. The bride and groom have the hood decorated in floral wreaths. Then there’s a party in a hotel, or house, or in the streets. Usually it is an open-door policy. Alcohol sometimes served on the downlow.

Surprisingly, an Egyptian wedding can be put together in a matter of weeks.

For me personally, I need a couple years trial period. Dating. Living together. Not “living in sin” as much as figuring it out. Falling in love with the world, together.

And I don’t think I’m unique. Maybe it’s a culture thing. I recently did a little Facebook poll to ask my friends how long they were dating, engaged, etc. The stories posted were plenty and powerful. From couples who have been together for decades, divorced couples that celebrate their marriages, inter-religious couples, inter-racial couples, gay couples, newlywed couples…  I teared up reading them and had to share. Makes you believe in love, again and again and again.

Nancy: Met in April, engaged in September, married in December. Knew he was the one the minute I met him. Told my mother the next day after I met him, that he was the one I was going to marry. Been married for 37 years.

Kathryn: met online september, engaged in november, moved in together march, married 11 months after living together, coming up to 13th wedding anniversary next month.

Amber: together 6 yrs, engaged 1yr – married for 13 yrs! OMG – I just realized I have over half of my life invested with him… how cool.

Malik: Together for 20 years, married for 16, blissfully happy and just renewed our vows on NYE.

Carey: I think you can tell you is that it is not about the quantity of time, it’s about the quality of the love.

Nate: Carey makes a great point. My husband and I met right after college, dated for a little over a year, lived together for three years, and then were engaged for 15 months. And we celebrated our fifth wedding anniversary last fall.

Catherine: We were friends with each other from (high) school before starting the relationship. Moved in together within a matter of months, lived & travelled all over world for following five years, engaged, then married a year later, now married for almost seven years with two kids.

Todd: 3 years before engagement, 1 1/2 years between engagement and wedding.

Sarah: Together for 5 yrs, engaged a yr and some change, married 10 yrs this June! I knew we would be married before our first date (not that people actually date in college). When you know you know.

Lauren: I’m not married or engaged BUT my best friend’s parents started dating feb 1st and were married feb 21st of the same year. They have had 5 children and have been married around 38 years. They only knew of each other maybe a year before they dated.

Lauren: I’ve also been in a committed relationship for 6 and a half years. No idea when I’ll be hearing wedding bells.

Beth: We dated for six years and our engagement was about 16 months. When we give advice to other couples, we encourage them to not have their engagement last longer than one year.

Sarah: For me, two years dating before engagement, and then a year and a few months (July to following September) before getting married. Useful context: wedding planning for any formal kind of wedding takes about a year (some do more, some do less) because venues book a year in advance. My husband and I knew we were getting married pretty much right off the bat. I had to wait from December to July from the time the ring was acquired until I received it. Kids were a consideration for us: I’m 32 so I didn’t want to wait too long. We got engaged right before my grandmother’s 90th birthday so I could share that with her and my extended family.

Matt: Honestly most of my friends the last 5 years have dated and gotten married within a year. I wouldn’t be shocked if I did the same thing. Some people date for way longer. To each their own. Whatever works works!

Kelly: Engaged after a year, married 9 months later and married 13 years. My Dad proposed to my Mom two weeks after they met. They married 6 months later and were married 47 years when my mother passed away.

Adam: 2 1/2 years before engagement and 6 months after was the wedding.

Kimberlee: Together a month shy of 2 years before engagement, and a year and 4 months before wedding.

Morgan: engaged after 6 months, looking to get married next week. haha. I think that’s very unusual though.

Elizabeth: Together 6 years, then engaged a few months before getting married

Nathan: Engaged after 8 months and married 8 months after that. We’ve been married for 3 years now.

Nichole: Jason and I only dated for about 6 months, and then married… been married 11 years now!

Carey: Dated for 2 years, engaged for a little over year, now married for three and happily counting…

Joanne: Two years before engagement , married one year after engagement

Deborah: 5 years before we got married, 9 mos engagement.

Iyabo: Year and a half dating before engaged. 4 months later we were married.

Gregory: I dated my wife for two years, proposed in August (with a song I wrote for her) tried to set the ceremony for Sept of the same year!! but couldn’t pull it together…we had to settle for Nov. (4 months – and the whole thing set us back only $5K: ceremony, dress, suite, dinner, party decorations – my wife is from Mexico and they have “godparents” for Everything, so a lot was given: her makeup and hair, wine, etc…). Married now for 2yrs 3months!!

Hayde: We don’t have godparents for everything thats something made up here in usa not a real Mexican tradition, sorry buddy but had to correct your comment!

Lety: Dated a little over a year, engaged for 11 months. That said, my dad was all “what is going on/where’s the ring?” after he knew we had been dating for 3 months since dating is an uncomfortable, nonexistent concept for him. You should fake being married, it’s pretty regularly done and not a big deal, I think fulbright actually recommends it in their documents they sent us with apartment hunting tips.

Susan: Together 16 months, engaged a little over a year and married for almost 10!

Jamie: Together a year and a half before married, and the ‘wedding’ was just 2 months after we decided to get married.

Barb: We dated for about a year, but knew each other for about 1 1/2 years. Only engaged for 6 months!

Barb: Oh, we have been married for 10 years.

My parents: Almost 2 years dating. Will be married 40 years next month.

750 Words For My Egyptians Friends